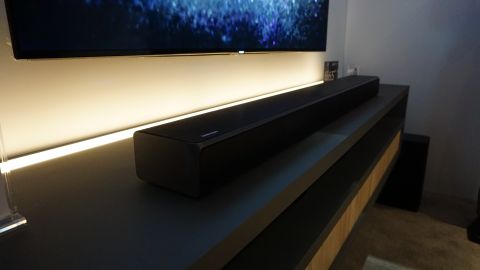 Naturally, we couldn't wait to put the K950 through its Dolby Atmos paces – and to say it didn't disappoint was an understatement.

For starters, the sheer power of the system is insane for such a compact and, in the circumstances, inexpensive system. The sound comfortably filled our large test room with a huge but also outstandingly cohesive soundstage – and when we say filled, we mean in terms of height as well as front and rear audio. It's like you're sitting in a huge bubble of stunning sound.

This means, of course, that you feel like you're right there in a film's world – and you really can't overstate how much such a convincing sense of height adds to the audio experience.

It's not just the general sense of height in the audio mix that's so effective either. The accuracy of effects placement in the vertical domain is also startlingly effective, letting you experience a real sense of layering when objects are passing overhead at different heights. We've never heard this sort of audio detail delivered so effectively on a home cinema system that doesn't include physical speakers in your ceiling.

Atmos transitions from front to back and back to front are outstanding too, with the rear's matching perfectly the tone of the fronts. Kudos is due as well to the way the main soundbar throws effects to the side, as well as out in front and above.

Having so much power to play with, meanwhile, enables the system to swell and ebb effortlessly during a movie without the soundstage ever starting to sound strained or short of sensitivity.

The subwoofer is much more effective than it perhaps looks, delivering rich, deep, responsive bass that melds effortlessly into the bottom end of the main soundbar's bass capabilities.

Nor is there a hint of distortion, phutting, drop-out or crackle from any of the speakers, even at volume levels far higher than most people will feel comfortable with.

The audio isn't just about brute power and bold dynamics, though. It's also got the finesse to reveal subtleties and details in the mix that even many pretty serious separates systems don't manage. In fact, I'd even say it's with quieter, subtler but still very effective Atmos mixes like the one for Eddie The Eagle that you really appreciate the full quality of the K950, as things like subtle ambient and spatial effects emerge with outstanding finesse and subtlety across all channels.

Vocals sound beautifully rich and clear, but also fully integrated into their in-movie surroundings. They also, thankfully, sound like they're coming from the screen, rather than the soundbar underneath it.

Really, the only area where we felt the K950 could have done more in full Atmos mode was with the sides of the audio mix; there sometimes seemed to be small left and right gaps in the otherwise immaculately immersive sound 'bubble'. But this is such a small negative amid all the great stuff that we feel almost embarrassed mentioning it.

Shifting to native Dolby Digital 5.1/7.1 mixes (and DTS mixes that have been re-encoded into Dolby Digital), while we obviously really missed the Atmos height effects the K950 still sounds fantastically precise and dramatic – again, better than any other similar system we've heard.

Activating the unhelpfully named 'Surround Sound' mode to apply an Atmos-like effect to multi-channel Dolby Digital mixes proves surprisingly effective. There's an immediately obvious and startlingly convincing increase in the scale of the sound, especially in the vertical domain, which definitely increases your sense of immersion in what you're watching.

The 'pseudo Atmos' upscale of 5.1/7.1 sources does see voices losing a touch of clarity, partly because bass becomes a touch over-emphasised. We also felt, as before, that there could be a little more audio information in the mid left and right areas of the sound 'bubble'. But again, these are minor points in the context of everything the K950 does spectacularly right.

The only spoiler for the K950's truly unprecedented performance is the stereo DTS issue if you don't have a Blu-ray player capable of re-encoding DTS to Dolby Digital.

The stereo feeds are handled very nicely, of course, but having a system with the surround sound capabilities of the K950 playing mere stereo just isn't right.

Activating the pseudo surround mode with stereo DTS creates a much bigger soundstage, and does manage to get at least some sound into the rear speakers. But inevitably there's only so much that even the cleverest processing can do with a mere stereo source, so there's no sense of accurately placed surround details or a real sense of movie space.

In fact, the pseudo surround mode has an unnerving habit of reproducing voices in the rear speakers at the same time as the front ones. In short, even 'souped up' stereo on the K950 is about as far from the quality of the system's true Atmos experience as you can get.

It really wouldn't be fair to finish this section on a negative note, though. The most important thing about the K950 is that, provided you do everything in your power to feed it a non-DTS diet, it sets a phenomenal new performance benchmark for the compact, all-in-one audio package market.

As noted in the introductory section, Samsung has tried to make the K950 a little less demanding in terms of speaker positioning/room conditions than other domestic Atmos systems. But there's still a lot to think about.

For starters the speaker bar ideally needs to be set against a flat wall, rather than in a corner of your room. You'll also need a flat ceiling, largely free of beams and definitely free of vaulting, if you want the height aspect of an Atmos mix to work properly, and the rears benefit from being fairly precisely and evenly positioned behind your seating position. So have a think about your room layout to check it's going to be compatible with the way the K950 works.

One big plus point about the set-up, though, is that since the subwoofer and rears are all wireless you don't have to worry about spooling cable all over your room.

Other issues that make the K950 trickier to use than it might ideally be are that you can't adjust settings via on-screen menus on your TV, and the faff surrounding DTS that we discussed earlier.