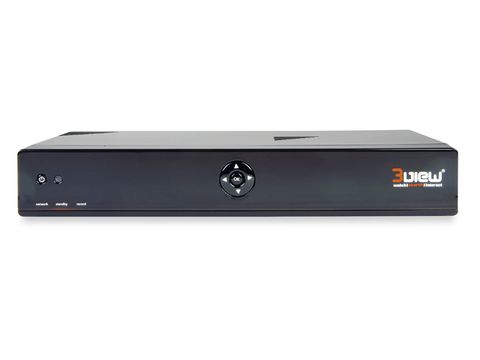 The 3VHD isn't Freeview+ certified but has much the same functionality, including series recording

3view may not be the first manufacturer to release a hybrid VoD and Freeview HD PVR but this UK-based company's inaugural 3VHD product has lots of features on offer if you want a media server as well as a recorder.

The pun-tastic term '3view' is defined as 'watch, search and interact', alluding not just to TV but the networking and online features on offer.

Clad in smart-looking black plastic, 3view is roughly the same size as the average Blu-ray player and runs quietly and coolly even after prolonged use. It comes with an external 12V power supply and there are plans to offer one with a built-in Homeplug in future.

Its 500GB 2.5in SATA hard drive can be swapped for one of your own up to 1TB at the cost of voiding your warranty. The box is also unique for a Freeview PVR in having a Z-Wave chip installed, which will enable you to control lighting and heating systems at a later date.

The front fascia lacks a readout but does have a power button, standby and record indicators and a navigation pad for using the menus and channel-zapping. A front-mounted USB port would have been welcome for quickly plugging in drives when the box is sitting on a shelf, but there are two on the rear.

Also here are an Ethernet port, HDMI, single Scart, an SPDIF audio output, and an aerial loopthrough – but no modulator. Sporting a 3view sticker, the remote feels rather 'off -the-shelf', with a familiar button arrangement that's clearly labelled. It's not bad – it's just not as adventurous as the box itself.

That said, 3view is co-developing a Wii-style gyroscopic controller that could see a release by the end of the year. The receiver will work with most wired or wireless mice and keyboards; both are required if you want to use the many online features (notably web-browsing).

Getting the receiver up and running is straightforward. You select your preferred output resolution (up to 1080p with upscaling of SD sources supported) then scan for channels, after which a network setup wizard automatically detects your network settings (you'll need to add your own USB dongle for Wi-Fi) or there's a manual option if you prefer.

Scanning was slow on our early pre-production test model but channels can be re-numbered and re-named and a favourites list created. Updates can be downloaded directly via the net or transferred from a USB drive.

With its fetching and unobtrusive red wallpaper the branching menu system is uncluttered and easy to navigate, if a little ugly in places – notably the interactive menu. We also like the way the current channel shrinks into the corner or side of the screen when accessing it.

The seven-day EPG goes above and beyond the average Freeview PVR; a conventional scrollable grid system lumps TV and radio channels together allowing six channels onscreen at a time while letting you scroll through the full seven days of data. The current channel and programme synopsis are displayed at the top.

Selecting a programme brings up a pop-up menu of options: watch this channel, record episode, record series, view upcoming (where you get a list of episodes with the option to record) or manual record. A similar menu is presented for a show you're recording with the option to play it while in progress.

Dipping into the PVR menu brings up the copious EPG search options. With an onscreen keyboard you can search by title, keywords, people, genre or 'AV Props' (whether close-captioned, Dolby or in HD or with alternative languages available).

A wishlist system will auto-search listings according to your keywords and there are plans to introduce a star ratings system. A notable omission is red button interactivity.

Recordings can be scheduled using a manual timer as well as the EPG with the ability to specify duration and repeat options. A number of recording defaults can be set up in advance and applied on the fly when setting up recordings manually or from the EPG.

You can make them essential, high, medium or low priority, set a buffer either side up to an hour before or three afterwards, choose to record first-run episodes only or repeats too and specify if Aerial input and loopthrough you want to keep the recording as long as possible, forever or for a period of up to four weeks.

Recordings are listed with name and date and cannot be exported. You can record two SD or HD channels at once and if clashes occur you're given the option to order the proposed recordings in terms of priority.

Playback is aided by an onscreen timeline with the ability to slow it down to 1/16, 1/8, 1/4 or ½ speed or fast-forward/rewind at 3, 8, 15, 30 or 90x speeds. At present, video on demand comes from YouTube (where 3view has smartly included a section on using the box) and BBC iPlayer including HD. The latter was not enabled on our test box but has a big-screen interface not dissimilar to that found on Freesat boxes, including searching via an onscreen keyboard.

Sky Player appears in the menus but is not expected until the autumn. Other web-enabled functionality includes Opera-based web browsing via Google and widgets. Pressing the blue button brings up a row of widgets that currently includes Facebook, Twitter, weather, BBC News, RSS feeds from BBC News and Yahoo! and instant messaging from a range of providers including MSN.

As with the browser, a keyboard and mouse is essential for these as there's no provision for text-style entry using the remote. 3view plans to add shopping, information and more VoD services in future.

Media streaming is possible from DLNA/uPnP-compatible USB drives or networked devices such as PCs and NAS drives. There are separate menus for My Music, My Video and My Photo, with playlist and image slideshow options (while listening to music) and files can be copied to the hard drive. Formats supported include MP4, AVI, MKV, MP3, AAC and JPEG.

The box proved reliable for TV watching and recording. Channel-changing is quick, as is navigating the EPG, and we had no recording hiccups.

With a good reception, the tuners generate crisp-looking images from SD and HD channels that are faithfully maintained in the recordings.

We had no trouble playing a variety of media files from connected drives and YouTube video streaming also proved unproblematic.