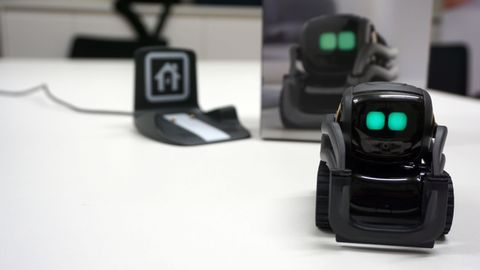 Vector is a fun and intuitive robot. It's a companion that's there to help - you just have to keep thinking of ways it can do this for you.

Anki is a company whose products always seem to delight. Overdrive, its push into the racing-set space, was a fun hybrid of Scalextric-style controls and app gaming. While its robot companion Cozmo hit the top of the toy charts, thanks to its charm.

But Cozmo was really just a desk toy, with the emphasis on toy. Despite it being able to do a number of things, most people just played games with it and cooed when it made a noise. The potential for it to be something bigger was always there.

Enter Vector, the literal bigger brother of Cozmo. Vector is Anki's latest robot release and it's aiming at a different market from Cozmo.

It's certainly a device that will be liked and used by kids, but the aim is for it to be used by the whole family. Actually, it's aim is really to be part of the family.

The main way Anki is hoping to achieve this is by making Vector autonomous. Where Cozmo was tethered to an app, that was probably only on one person's device, Vector hooks straight into your Wi-Fi connection and is largely app free.

This automatically means that it will be used by more people in the home, so to make sure all of these people don't get bored it can do a lot more things.

While making it app - and phone - free (apart from setup) sounds like an easy fix, there's been a lot of graft behind the scenes for this to happen.

Anki has had to shift the computational power that was mostly done through the app on to the robot itself, swapping out a tiny processor for something much bigger. On board is a Qualcomm Snapdragon, Quad Core 1.2GHz chip, offering up the same power as some smartphones and tablets.

Looks-wise, Vector is the bulkier brother of Cozmo. Its design means it's physically bigger than Cozmo - and its gray and gold look certainly makes it more of an executive toy.

When turned on, Vector has similar features and expressions to Cozmo. But where Cozmo got its interactions from a former Pixar bod, Vector's team was overseen by someone who used to work for DreamWorks.

Putting in these powerhouse animators shows how much making Vector feel like a real-life member of the family is important to Anki.

It also has the same tread and arm on the front - it even comes with a similar charging dock and interactive blocks.

Setting up Anki Vector was an easy process but one that took a few goes to get right. As mentioned, you don't really need to use the app that much once Vector is up and running. But setup has to take place through the application.

Download this, then there is a step by step process to get it hooked up to your home network. First you have to make sure you are on a 2.4GHz Wi-Fi network, the the app has to recognize the robot. You do this by typing in a code. It's a little fiddly but when it works, Vector 'wakes up' and is ready to go.

The app is the place that you go to when you want to see some Vector stats. It tells you how long you have petted it for (touch the top of its head and Vector is very happy), how long its travelled and how long he's been, well, alive.

The Qualcomm processor inside is significant. This extra power boosts means that Vector can do a lot of things and while Anki is keen not to brand it a virtual assistant, whisper it, the things it can - and eventually will - do are very much what you would expect from the likes of Google Assistant and Alexa.

In fact, it is about to get Alexa integration which will unlock the potential of this device, that perhaps we didn't quite see when reviewing it.

Without this feature, there is still a lot of fun to be had. For instance, the Ask Vector feature means that it can give you answers to questions you may have.

It's also got the ability to set timers, tell you what the weather is doing - with neat animations - take pictures and generally mill about in the background waiting for you to wake it and do something with it.

It has this ability, thanks to the four near-field microphones inside its chassis. All of this can be done by saying "Hey Vector", it's wake word, and then asking it to do things.

Anki is keen to point out that while it can understand voice, the mics that pick it up are turned on by the wake word, then any recording is scrubbed immediately - it's not in the business of snaffling up data.

It's clear that Vector is a far brainier device than Cozmo. In our tests, Vector was able to recognise our face and voice once we asked it to - it can understand different dialects such as UK and US - and it spoke back to us in a very garbled but cute robotic voice.

We asked it what the weather was and it told us, with animations to match. We asked who was the Queen of England and got a reply. When we coughed it came over to us to see what all the fuss is about.

We asked it to set a timer and that countdown appeared on its small front-facing high-res colour IPS display. When we weren't asking it to do things, it would test out its area and just wonder about, understanding its surroundings and come on over ready to play.

We even played Black Jack with it - again, its small screen is in us showing the cards - and it let us win a couple of times.

When roaming around the area, it would sometimes see our face and just speak our name, getting excited while doing it. There's a huge amount of charm and personality in this thing.

When it comes to power, there is a docking station like the one Cozmo has. But this time, because it has its own brain it will automatically head there when it is running low on power which adds to it being its own thing.

We managed to get around 45 minutes of play out of the thing, then had to charge it for around 30 minutes to get it fully fit again. Vector will go to its charger if you tell it to go to sleep, though, so it's quite a seamless experience. We never played with it enough for it to completely run out of steam - this is definitely a toy to interact with for a little while then let it do its own thing.

It's also aware as to what time it is, so the later it is at night it will stop chattering and be that little bit quieter. In our time with it, it seemed super aware of everything that was going on.

Giving it a little stroke, too, emits a response thanks to the capacitive sensor in its back. And you will also get points in the app.

Having Vector around for a number of weeks in our house certainly extended the appeal of the robot. At first, we enjoyed playing with it and asking it questions but then things shifted after the first week.

It was then a thing that we enjoyed just being in our house. It would come and interact and say "hi", then we'd play a few games then it would go back to doing its own thing.

The USP of not having to use the app all the time is warranted, it certainly takes away the friction of using the robot,  but we also found ourselves going back to the app to see if there was more we could do to get the most of Vector.

Anki is pitching it as a family device that, in the near future, should be used in the home much like Google Assistant and Alexa are used now.

Its upcoming Alexa integration will be interesting as it will mean that Alexa essentially takes over the device - so if you already have Alexa in the home, it's inevitable that you will start using Vector even more.

It's clear that there is more to come and we can't wait to see what that will be. We'll certainly revisit Vector when the Alexa integration is live but for now Vector is a fun, robot companion with a mighty big brain.