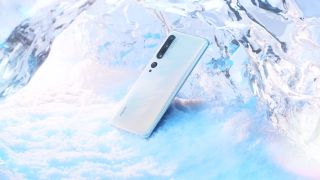 Xiaomi has officially started teasing us about the launch of a 108MP camera smartphone in India. The company announced the Mi CC9 Pro earlier this month with the world's first 108MP Penta-camera setup. The same phone debuted in Europe as the Mi Note 10 Pro.

Xiaomi Global VP & MD, India, Manu Kumar Jain has tweeted, "IT'S COMING #108MP" and while he didn't reveal the name of the phone, we suspect it to be the Mi Note 10 series. That or it will be an all-new phone rocking a 108MP camera sensor.

The Chinese electronics maker hasn't really released a Mi branded premium phone in the Indian market since Mi Mix 2. Though it's Android One lineup of Mi A-series has received a third sequel this year.

Xiaomi's Mi Note 10 Pro is made out of glass with an aluminum chassis and features a 6.4-inch AMOLED screen. The display has a Full HD+ (2340 x 1080 pixels) resolution and a u-shaped notch cutout giving it a 19.5:9 aspect ratio. The screen supports the DCI-P3 color gamut range and supports HDR10 playback. It is also coated with a layer of Corning's Gorilla Glass 5. The optical fingerprint reader is also built into the display.

The phone is powered by Qualcomm Snapdragon 730G chipset with an octa-core CPU and Adreno 618 GPU. It is supported by up to 8GB RAM, 256GB storage, and runs on MIUI 11 out-of-the-box.

One of the major highlights about this phone is its five-camera setup, which includes a primary 108MP Samsung ISOCELL Bright HMX sensor with an f/1.7 aperture supported by PDAF, Laser autofocus and Optical Image Stabilization (OIS).