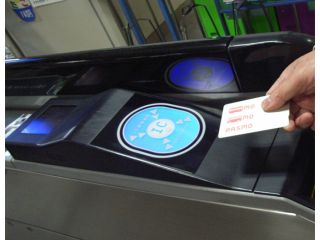 An unusual field test currently underway in Tokyo Station is using the massed ranks of hundreds of thousands of commuters to generate electricity from the impact of their footsteps.

JR East has taken a prototype system it previously tested in its own headquarters out into the real world by installing piezoelectric generators in the ticket gates at one of the giant station's doors.

The generators work like reversed speakers - instead of electricity producing sound (i.e. vibrations), the vibrations caused in sensors by people passing through the ticket gates create electricity.

According to the engineers involved, each commuter walking through a gate can produce enough power to light a 100W light bulb for one hundredth of a second. The half million or so people expected to hit the test gates each morning should, therefore, light the bulb for 80 minutes.