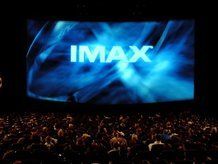 IMAX dazzled bigger audiences than ever before in 2010

IMAX box office takings doubled in 2010 compared to those of 2009 as the public's appetite for super-sized cinema grew despite gloomy economic conditions.

More films were released in IMAX in 2010 than ever before, including nine of the top ten grossing movies of the year.

Visually stunning big name releases like Avatar that are shown to their best effect on the larger IMAX screens are also likely to have helped to boost sales.

It's not all about 3D, you know

IMAX is keen not to put too much onus on the popularity of 3D releases in 2010, however, with Richard Gelfond, CEO of the IMAX Corporation, stating: "Our 2010 box office results reflect our model of showcasing the biggest blockbuster titles, whether they are 2D or 3D."

A portion of the box office takings also came from the company's own documentary releases, including the likes of Hubble 3D, Under the Sea 3D and Deep Sea 3D.

With blockbusters like TRON: Legacy, Harry Potter and the Deathly Hallows Part 2 and Pirates of the Caribbean: On Stranger Tides slated for IMAX release this year, this stellar growth could be set to continue.