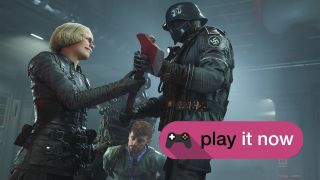 By staying true to the series’ heritage, Wolfenstein II: The New Colossus has ended up offering a stronger, more timely social commentary than pretty much any game released in 2017. Or ever, for that matter. And how has the third Wolfenstein from developer MachineGames done that? Why, by letting you shoot a hell of a lot of Nazis, of course.

Wolfenstein II picks up exactly where the original game left off – spoiler alert – with protagonist B.J. Blazkowicz mortally wounded and not long for this world, having just been on the wrong end of a grenade held by General Deathshead.

Rescued and saved by emergency surgery, Blazkowicz begins the New Colossus as a badass in a wheelchair fresh from a five-month coma. From there it only gets joyfully sillier as you progress.

MachineGames has once again managed to put together a shooter that feels superb in every sense: movement; gunplay; tactics; looks; sounds. It all comes together brilliantly. Perfect? No, not by a long shot, but the catharsis felt throughout the whole of the 15-hour single-player campaign is something most other FPS titles fall woefully short of.

In recent memory we have, what, Titanfall 2? That’s about it if you’re only playing first person shooters, so Wolfenstein's third outing this generation is very welcome indeed.

There’s something else beyond its mechanics – more on those in a bit – that helps Wolfenstein II stand out from the crowd: a story to care about.

I’d be lying if I said this is the kind of on-screen drama that would make HBO’s finest roar with envy. No, this is very much the trope-heavy fare we’ve come to expect from games.

But the New Colossus has something else on top of that: pathos. Heart. A surprising sense of warmth popping up between extended bouts of ultraviolence against National Socialists.

Of course, details would ruin surprises, but the fact MachineGames has managed to make Blazkowicz – the poster child for idiot meathead action heroes – a man of compassion, humility and vulnerability speaks volumes for the Swedish developers’ writing team.

If you’d told me I’d well up at a Wolfenstein game back in 2009 I’d have laughed you out of the country. But it’s not just about making a walking jawline with guns sympathetic; Wolfenstein II sees players kickstart the second American revolution, aiming to free an occupied United States from the Nazi tyranny that took over in the first game’s alternate history.

A story with heart

The story begins in the world’s largest U-boat which takes you across the continental US – and much, much further – on missions of subterfuge, sabotage and all-out assault.

Backing you up is a team of faces both familiar and new. B.J’s beau, Anya (and her two belly-bound passengers) returns, providing an emotional drive for our hero’s story. Alongside her, the newly introduced Grace offers a stinging take on the archetypal empowered black woman of 60s America, tackling racism, motherhood and guerrilla war between puffs on her cigarette. And that’s just two people – every character has layers, things that drive them, fears and realistic, rational reactions to an insane situation.

It's all so well done, so well realized, so over-the-top and gratuitous and silly. And it’s funny too. Genuinely, laugh out loud funny. Just how MachineGames has been able to cram all of these disparate elements into one game  into one major, mainstream release from one of the world’s biggest publishers, no less - is completely beyond me. But I’m glad they have.

There’s a game that goes with the story, of course, because you need to be doing something to pass the time between cut scenes. Fortunately Wolfenstein II builds on what made The New Order and The Old Blood such satisfying experiences. Combat is chunky and full of feedback, with firefights feeling exhilarating and tactical in equal measure. The fact your approach to these situations is up to you just adds to it.

Do you go in quiet and try to get as far as possible without alerting any nearby Nazi officers, who are able to call in waves of reinforcements? Do you use distractions and ambushes to pick off the enemy one by one? Do you put a machine gun in one hand and a shotgun in the other, going in guns blazing and hoping to high heck there’s a laser turret somewhere in the combat zone?

Okay, so we’re not looking at Metal Gear Solid V levels of freedom here, but it’s still a refreshingly varied selection of approaches for a generally linear FPS.

Variety is the spice of gaming

And you will want to be mixing things up as you play, because the New Colossus does not muck about when it comes to killing you, over and over again. A super soldier you might be but a bullet sponge you are not.

Ducking and diving out of cover and assassinating commanding officers before they call in new troops is all well and good, but sometimes you really are just going to die unless you break out the big guns and shoot everything that moves.

Along the way you’ll be picking up upgrades for your weapons, unlocking perks by completing certain acts and even engaging in some hardcore body modification (in more ways than one), so the action manages to keep itself fresh throughout.

In the quiet parts when there’s nothing being shot, you’re free to wander and explore the slightly wider world on offer between Wolfenstein II’s shooting galleries. In doing so you'll discover the hidden goodies strewn around each level, and by just going for a wander you’re likely to notice something else you might not have while having your nose pressed against a submachine gun: this is a hell of a looker.

While the game might feel a bit constricted and grey for a while, it does open up to show you a world that hides far more than it shows. Snippets of news articles, postcards and messages all talk about a world you only see very little of, but these details in combination with a world that really is gorgeous make for an intriguing alternate America. As well as a game that actually looks better out of cutscenes, oddly.

Wolfenstein II is a completely single-player game, so once you’re done with its 14-or-so hour campaign, there’s little else to bring back the one-shot players.

Those who want to wring as much as possible out of an experience will be pleased with the aforementioned collectibles across each region, while the addition of assassination contracts gives you a bit of creative down time away from the main story missions. There’s also the chance to play with an alternate timeline for completionists (it doesn’t change a huge amount in-game bar one weapon).

But the one thing I see offering the biggest impetus to replay the New Colossus? It’s really good. It’s worth playing a second time. Something made with this much unfettered joy should be relived, not just played and discarded. Even if only to see that ‘shower’ scene one more time. Or the audition. Or the chat show.

Wolfenstein II isn’t the greatest first-person shooter, but it’s easily up there with the best single-player games of this generation. Solid mechanics make it something fun to play; something to still enjoy even as you do take part in the rather repetitive task of mowing down hundreds (thousands?) of Nazis.

A story of real heart and soul, meanwhile, makes it something you want to play more of, if only to see where you and your motley crew of miscreants end up next (clue: further away than you’d expect).

This is an expertly crafted title from MachineGames, balancing the swagger of an experienced, confident development team with a genuine sense of creative freedom – joy, even – you just don’t see in mainstream titles from the big publishers. Wolfenstein II is the anti-EA; the non-Ubisoft. Through silliness, fun and pathos, the New Colossus really gives you the chance to make America great again.