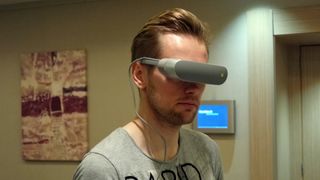 While some of what he said was tongue in cheek, the overall message to the rest of the industry was clear:

"There are many headsets out there – Oculus, HTC Vive – and I hate those things. Seriously, I hate them, because I love VR.

"I know I love the VR experience, but I hate those devices because they are bulky, heavy and if I'm wearing it, it destroys my hairstyle."

The comments were made prior to the unveiling of the LG 360 VR, a lightweight headset that only weighs 117g and can be carried around with the LG G5 – using a USB Type-C tether to connect to the phone, rather than shoving it in at the front.

In fact, such is its slim design that Woo has to outline that this is a 'special VR' that's 'not a toy'. It's also foldable and more portable than the other larger headsets, which LG's designer also claimed made it better for using on planes to catch up on your films or other content.

In practice, using the LG VR 360 wasn't a great experience – the slimline nature removed some of the immersive feel of the larger headsets, and the 720p resolution was rather fuzzy – so even at a lower price this might not be the next step for VR.

It's no secret that there's a lot more work for VR manufacturers to do to convince consumers that it's not just the 'new 3D' and will disappear soon – LG's Woo is right that the current headsets are too heavy and blocky to be seen as sleek consumer products, but the new VR 360 isn't quite the answer yet either.