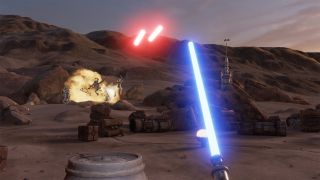 Star Wars fans with an HTC Vive will be able to put Yoda's famous "Do or do not, there is no try" adage into practice on Monday when HTC makes "Trials on Tatooine," the second licensed Star Wars game in virtual reality, available for free for all Vive owners.

HTC made the announcement this afternoon at Star Wars Celebration Europe, which is taking place in London this weekend.

We've written about our hands on time with the demo extensively in the past. But in case you missed it, Trials on Tatooine casts you as a hero in the Galaxy Far, Far Away, tasking you to repair the Falcon and fend off a wave of Stormtroopers using Luke's lightsaber.

The demo, developed by ILMxLAB, Lucasfilm's laboratory for immersive entertainment, was one of the best demos shown off at this year's Game Developers Conference, and one of the first major partner projects shown off by Valve and HTC.

If you're like Anakin and can't wait to take on the role of a Jedi Master, residents of London can check out Trials of Tatooine at the Star Wars Celebration alongside other events, workshops and exhibits focused around Star Wars.