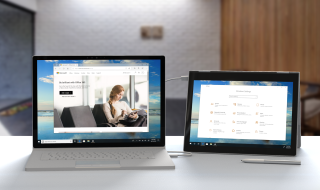 Great news, Android users. The people who first brought you the best app that turns the iPad into a secondary screen, lag-free, is now available for Android devices.

With macOS Catalina just around the corner and Apple’s Sidecar getting ready to make its debut, Duet Display has turned to the most popular mobile OS. That’s right; the best app for letting you turn your iPad and iPhone into a secondary display for both Mac and PC computers now offers that very same functionality to Android tablets, phones and – amazingly enough – Chromebooks.

These aforementioned devices can now be used as a second display for your Macs running on OS 10.14 or later and PCs running on Windows 10, whether wired or wirelessly, as long as those devices are running on Android 7.1+. This means that Android device users can now enjoy the same increased productivity, more seamless workflow and better multitasking as Apple device users – all for just $9.99 in the US.

However, don’t take this news to mean that Duet Display is at all threatened by the arrival of Sidecar. While we can’t compare how it measures up to one of macOS Catalina’s key features just yet, Duet doesn’t seem to be worried.

The Verge reported that Duet CEO and founder Rahul Dewan said in an email that “Sidecar is a free product made for casual users, and we have many features they don’t.”

In other words, Sidecar may be designed for casual use and mainstream users, whereas Duet Display is intended to meet the needs of a serious professional or creative. This is made clear through features like optimization for ultra-responsive drawing, precise control in a number of widely used software like Photoshop, Illustrator and Lightroom, cross-platform support and adding a touch bar to the iPad with your Mac.

The Android version isn’t as comprehensive in features as the Mac version, but the “performance is already very close compared to iOS,” according to Dewan. Those extra features will be added later with new updates.