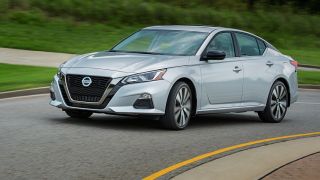 In my area, there are brand new roadways with freshly painted markings, but that’s not the norm. In most cases, the roads are well-used and the markings are slightly faded. As we say in journalism, that’s a good test scenario. I drove the Altima several times on newer roads and older, in both rain and snow and on bright sunny days.

The most interesting discovery is that all of the beeps and blips the vehicle makes are pretty helpful. The Altima will chime at you if the car ventures outside of the lane, thanks to what Nissan calls ProPilot Assist. There’s a small icon on the steering wheel you use to activate the safety shield that looks a bit like a Bluetooth badge.

Interestingly, the Altima will also beep as it adjusts its own speed for the car in front of you. Say you are driving at 55mph but you have the cruise control set at 60mph. You’ll hear a beep when you resume normal cruising speed.

The Altima also adjusts its speed around corners. I noticed how my speed would decrease automatically when the curve was more intense, and then when the car resumed normal speed it would beep yet again. It used to be that only luxury cars from Mercedes-Benz or BMW would adjust cruise control around corners but the Altima does this with ease.

As for the lane-keeping, it works quite well on good roads and bad. As time goes on, automakers like Nissan will keep tweaking their algorithms for a variety of roadway conditions. There’s some question about how much beeping we can handle, or how much we want the vehicle to assume control. I noticed the Altima would remind me to hold on to the steering wheel occasionally.

I’ve tested lane-keeping in many recent makes and models, but I liked how authoritatively it works in the Altima – it’s not going to take over but it’s also going to keep things nicely centered for you, a bit like a parent who's assisting a teenager (but not overly so).

By the way, there’s a handy video that shows you how all of this works. It explains how the Altima is constantly watching lane markings and I experienced that several times – the soft nudges back into the lane, the micro-adjustments we’re supposed to make as a driver but are too busy talking to a friend to notice. Technology is at its best when we barely notice it is doing anything and yet it is working harder so we don’t have to focus so much.

Without obvious lane markings, the Altima still performed quite admirably and maintained a consistent center position. Ironically, it was when I tried to do the nudging myself that the vehicle would sometimes seem to say 'not on my watch' and compensate for my errors.