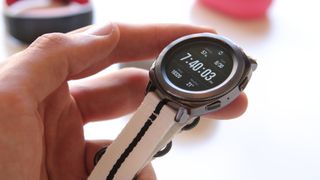 Samsung used CES 2018 to finally bring both its smart home and wearable ecosystems one step closer together, but I still don't think it's far enough.

Samsung is bringing SmartThings – the platform the brand bought to control smart home devices, which is already available on Android and iOS devices – to both the Gear S3 and Gear Sport watch.

It means you should be able to turn your lighting or heating on from your wrist with relatively little effort, and while that's a good upgrade it's still not the perfect solution.

Samsung keeps going on about how great its virtual assistant Bixby is, and I want it to be the thing that lets me control my smart home from my wrist. But, for some reason, it's still not how you interact with SmartThings.

Samsung has spent the last nine months since it introduced Bixby on the Galaxy S8 telling us how the platform will be improved, and what it can do for you compared to Siri or Google Assistant, but it's still not available on some of the top Samsung products.

Samsung announced at CES this year that it wouldn't be adopting either Google Assistant or Amazon Alexa for its TV range, as a lot of big name brands have done, but instead will introduce Bixby to its upcoming products.

So why isn’t Bixby ready to control my smart home from my wrist? In fact, why isn't Bixby on my wrist anyway?

The thing is, controlling the smart home is inherently complicated. You'll have lots of products, from a variety of different brands and all of them need to work together.

The basic SmartThings platform is suitable for that, but only from your phone.

On a device with a 5-inch or larger screen you can control a broad range of devices quickly and easily. I haven't tried SmartThings on Gear watches yet, but it's hard to see it working as well on such a small display as the Gear Sport only has a 1.2-inch screen.

"Turn on my kitchen lights" and it's ready to go. There's no need to enter a SmartThings app and scroll down to the room and then the device you want to interact with.

It’s the same reason voice integration on Samsung TVs makes sense – you don't have to navigate through multiple menus via the cumbersome controls when you can just use your voice to do it quickly.

If Bixby was the way to interact with SmartThings on the Gear watches, you’d be able to tap the screen (or say a command) and ask for it to turn on the lights in the living room, and it’d be done as quickly as pressing a light switch on the wall. Instead it looks like Samsung will want me to control things via taps on the smartwatch screen.

Samsung has announced Bixby 2.0, which it plans to bring to more smart home products to expand its SmartThings platform. Bixby 2.0 is designed to help internet of things devices communicate better, but Samsung hasn't confirmed whether it will come to Gear watches.

Considering the company saw fit to announce the SmartThings platform for Gear watches without mentioning Bixby – let alone its future update – it doesn't seem to be a major focus for the company.

Bixby is a big enough deal for Samsung to place a major bet on using it within its vastly popular TV range as well as including a dedicated hardware button on the side of its most recent range of phones.

It even looks like the company will include the Bixby button again on the Galaxy S9 when it launches later this year, so why isn't it ready for the Gear range yet?

There's still no sign of it on the watches, and this SmartThings announcement – as interesting as it may seem at first glance – shows the company doesn't intend to release a wrist-based Bixby any time soon.