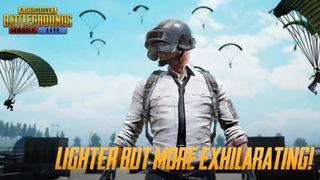 PUBG Mobile Lite is finally available to play in India. The toned down version of the popular battle royale game was released around a year ago in the Philippines. Since then, speculations were rife as to when Tencent is going to treat the Indian fans with PUBG Mobile Lite. And it is finally here.

The Lite version is specially made for smartphones with less than 2GB of RAM and so more people who have budget smartphones in India are going to get access to the world of PUBG Mobile. The app has been optimized to launch faster and is just 400MB in size so you save a lot of space in comparison to the regular version which requires 1GB+ download space.

Being a lite version, the game takes place in a smaller map with 60 players at a time and lasts for around 10 minutes without leaving out the essence of the battle royale style gameplay. With this, more users can experience PUBG Mobile now and that includes a big chunk of budget smartphone users who previously couldn't play the battle royale sensation. New players who sign up on PUBG Mobile Lite are also eligible to claim rewards in the form of skins and vehicles.

Network optimizations: PUBG Mobile Lite features a bunch of new optimizations that take into account the network latency. This includes enhanced aim assist, bullet trail adjustment, weapon recoil suppression which have been added to counter the effect of playing on a weak network.

Heal on the go: Players of the lite version have the ability to heal themselves while moving around the map. This feature has been added to avoid cases where a movement stops the in-game healing mechanism, making the players spend some time at a place to heal. It also results in a faster gameplay style and increases survivability rates.

PUBG Mobile Lite is available now and can be downloaded from the Google Play Store or you can just click this link that will take you straight to it.