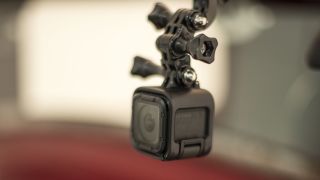 GoPro's latest iOS update brings with it a new app for the Apple Watch that lets you hit record, stop and preview, all from your wrist.

Working as a remote for your GoPo, you can preview what your camera is seeing before you hit record, as well as toggle between different capture modes, start and stop recording and add highlight tags to your videos for easier editing later.

The Apple Watch app doesn't carry all the features of the GoPro iPhone app, but in some cases, it'll be more convenient to access the main camera functions right on your wrist.

GoPro's Apple Watch app is compatible with Hero3 model or newer, Wi-Fi-equipped models, though the preview feature is not available on the Hero3.

GoPro has also overhauled its app for both iOS and Android, with a new design and the ability to grab images from your captured videos straight from the app.

You can check out the new features below.