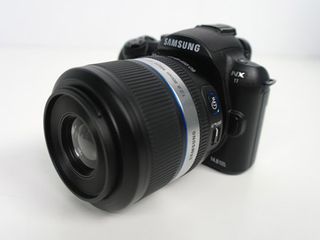 Images taken with the upcoming 60mm macro lens in the Samsung NX line-up have been released on the company's blog.

The maximum aperture of the lens if f/2.8, while Optical Image Stabilisation is designed to help reduce blur caused by unstable shooting.

The macro lens is among five new NX lenses which will be available soon, after an announcement at the end of 2010 revealed the NX lens roadmap.

The new 60mm lens is equipped with Samsung's i-Function technology, which allows photographers to change key settings such as aperture and shutter speed directly from the lens.

The lens is certainly not a budget optic, with several photography suppliers listing it for around £530.

i-Function lenses were introduced with the NX100 camera back in 2010, and continued with lenses for the NX11 released in December.

The pictures in the blog post demonstrate the lens's capability to capture fine details, such as on leaves and insects.

Samsung will release more pictures from the upcoming NX lens range soon. Stay tuned to TechRadar for more updates as they come.