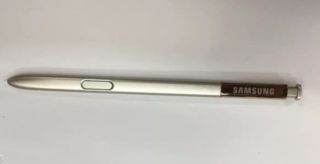 Samsung may have fixed the jammed stylus issue on the Samsung Galaxy Note 5 in the form of a reworked pen slot.

In a report by Phandroid, an image of the improved interior of a Galaxy Note 5 shows off a fixed port for the phone's S Pen stylus. The port includes a sturdier detection switch that appears far less likely to break, should the pen be put in the wrong way.

Originally, if the stylus was improperly inserted into the Galaxy Note 5, the pen could become permanently lodged in the slot, or prevent the detection mechanism from knowing if the S Pen was in use or not.

While we had a laugh at Samsung's seemingly-obvious warning labels when the problem first arose —literally reminding which users which way was up — there wasn't much else built into the phone to prevent the damage from occurring, so this is a considerable step up in preventing the issue.

Since the fix seems to have been stealthily implemented with the latest manufacturing run of the phone, it will be difficult to tell exactly if a particular Galaxy Note 5 comes with the improved pen slot. That said, it stands to reason that any newly-packaged versions from this year should have the feature.