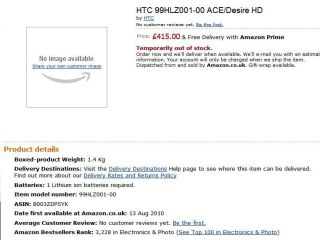 The Amazon listing for the Desire Z

Amazon may have just spilled the beans on the upcoming HTC announcement, offering two mystery handsets for pre-order.

The HTC Desire Z, or the HTC Vision as it's been codenamed, is hidden at the end of the 'HTC smartphone' category of Amazon UK, with a pre-order price of £455.

The HTC Desire HD was spotted on the site earlier by Electric Pig with a price tag of £415, but of more interest is the appearance of the Desire Z, which has been shown as the QWERTY keyboard-toting HTC Vision in the past.

Coming to the UK?

The only mention of this phone before was on a German network database, which listed the Desire Z and Desire HD as coming soon, but to see it in the UK will undoubtedly spark rumours of a forthcoming UK launch too.

However, before we get too excited, it's not uncommon for website managers to pre-load product pages based on rumour - the fact these phones are known as the HTC Ace and HTC Vision hint that this might be the case.

We've spoken to Amazon for clarification on these two mystery phones, and will let you know as soon as we hear back.