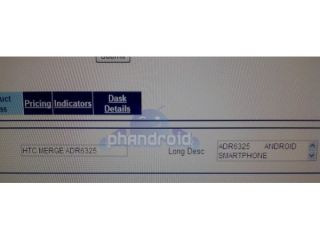 The HTC Merge shows up online

HTC might be working on bringing the Desire HD and Desire Z into the world next month, but that doesn't mean it doesn't have more tasty treats coming up too.

The HTC Merge has been spotted in Global Certification Forum filings and on the US network Verizon's database, and is rumoured to be a much more powerful handset.

The key word here is rumour, as specs of a 10MP camera and faster-than-1GHz processor seem thoroughly unsubstantiated.

Tablet or not tablet?

Similarly, rumours that it's a tablet look to be based on the name alone - a merging of a notebook and mobile phone.

But a couple of things are proven - it will be running Android, it has the model number ADR6325 and it's probably coming to Verizon.

At least it should be available in the UK, as it can support the correct GSM frequencies.

Sadly, the last part is the biggest clue - the phone could be just a re-design of the Desire HD or Desire Z... but let's just dream for a while before we're woken rudely by reality.

Via Softpedia and Phandroid