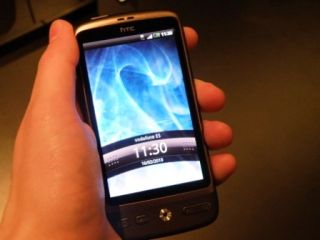 Hands on with Android 2.2 on the HTC Desire

We've managed to snag an unlocked HTC Desire, and popped a bit of Android 2.2 action on there to see if it really is that much better.

We'll get to the good news early: it is much better indeed. From an improved battery to considerably less choppy video recording, any slight foibles the HTC Desire had in our review have now been rectified.

One of the main upgrades with Android 2.2 is the just-in-time compiler, which improves the speed of the device in benchmark testing, and has worked wonders on the Google Nexus One.

It's less noticeable on the HTC Desire, because the phone simply swished through menus and screens with no hint of slowdown. But when it comes to web browsing, things are indeed a little quicker.

But the JIT compiler doesn't just speed up the OS, it makes it more efficient too. This helps alleviate that glaring problem: the HTC Desire has an awful battery life, often not lasting a full day between charges.

Thankfully that's been sorted with Android 2.2, where we found taking the phone off charge at 8AM would mean we still had 15-20% battery life when we stumble in at 12AM, even with push notifications and Wi-Fi on.

It's not stellar, but it does take the HTC Desire into the realm of normal smartphone power consumption

HD video recording has also been added into the Desire with the Froyo update, but it's not quite the update we were hoping for.

True, the choppy video has been improved with more pixels, but it's still grainy, a little blocky and simply goes to pieces in dark rooms – so this won't be the next device you'll want to use to become the next Paris Hilton.

It also still outputs movies in 3GP format, which does nothing to help the overall quality – we'll wait for the HTC Desire HD to see if that improves things in any way.