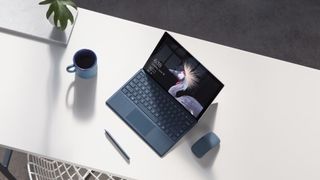 A major analyst firm is predicting that sales of PCs will drop by 2.7% for 2017 (compared to the previous year), and things are set to get worse with shipments slumping by 4% year-on-year in 2018.

After some brighter forecasts this year, this is back to the traditional doom and gloom with IDC’s latest report which is for the shipments of ‘personal computing devices’, meaning traditional desktop PCs, laptops and workstations, as well as tablets.

Looking further ahead to 2021, shipment volumes are expected to drop to 394 million units from 423 million units this year, which represents a decrease of around 7% in terms of pure volume.

Most of that predicted decline will come from weakness in the traditional desktop PC and also tablet markets, while laptops, workstations and detachable tablets (hybrids like Microsoft’s Surface devices) will actually make some positive gains according to IDC.

Ryan Reith, program vice president with IDC's Quarterly Mobile Device Trackers, highlighted detachables as a particular strong point, with most of these being Windows devices.

Reith noted: “Detachable tablets are expected to see double-digit growth from 2018 through 2021. Windows-based detachables already count for close to 50% of the volume in this category and this isn't expected to change much over the duration of the forecast. Apple's iPad Pro line-up will remain at 30-35% of the category with the remainder going to Google-based devices.”

Unfortunately, detachable hybrids are still not a massive part of the overall PC market, representing 5% of shipment volume this year, although that will grow to a healthy 9.4% in 2021.

IDC further observed that the traditional PC market did actually outperform expectations this year, despite problems such as component shortages, including issues with the supply levels of SSDs which we highlighted back in the spring.

Jay Chou, research manager with IDC's Quarterly Personal Computing Device Tracker, commented: "IDC believes the shortage issues should ease as we head toward 2018. Despite shrinking demand overall, IDC remain optimistic the market can expect continued growth in emerging form factors such as convertibles and ultraslim notebooks, which when combined will form the dominant notebook form factor by 2019.”