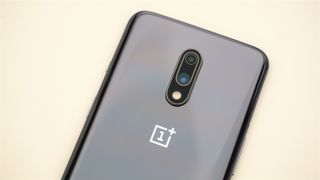 After the OnePlus 7 Pro recently received a major camera update with the OxygenOS 9.5.7, its younger sibling, the OnePlus 7 is now receiving an update which brings along a slew of camera improvements. As we mentioned in our review of the OnePlus 7 that the company has a rather brilliant track record for releasing regular OTA updates and that the cameras on the phone need more optimization. Well, the update is here and it weighs 125MB in size.

The OxygenOS 9.5.5 update also brings the May 2019 Android Security Patch to the OnePlus 7 along with general bug fixes and improvements throughout the interface. Coming to the cameras, it seems the developers at OnePlus have worked on a bunch of issues to improve the overall image quality offered by the OnePlus 7.

With the new update, users should notice better contrast and colour performance, enhanced accuracy and stability when auto-focusing, tweaks to nightscape mode resulting in crisp, bright and natural-looking pictures.

While we haven't tested the camera after the OxygenOS 9.5.5 update in-depth, yet, this one picture above definitely looks better after the update. There are less grain and more sharpness in the picture that was taken after updating to the new version of OxygenOS. The second picture also has a whole lot of textures if compared side by side with the first. In addition, the second picture has good contrast levels and also looks a bit more natural which means that OnePlus has curtailed over-optimization at the software level.

We will be using the OnePlus 7 camera more after the recent update to test its performance and will share the results with you soon.