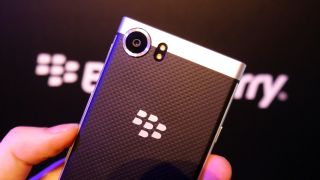 The ‘Ghost’ already made headlines when Evan Blass showed off the bezel-less smartphone’s render on Twitter, but there's more news. Hardip Singh, Executive Director at Optiemus, told Digit, that it it won’t be the only phone to launch this quarter.

Although Singh didn’t specify the second device, he confirmed that other than the two smartphones that are coming soon, Optiemus has more devices in the works for the year.

He stated, “We are going to come out with a whole range of models starting with two this quarter. And during the year, we have more models planned out in the coming quarters. We have a strong pipeline of models which we will be bringing in and they will be at various price points.”

The second smartphone could be the Ghost Pro, whose render was also leaked by Evan Blass, which seemed a little wider albeit shorter than the Ghost. The difference in aspects ratios seemed to be 18:9 for the former and 16:9 for the latter.

Remember BlackBerry Ghost? Of course you do (and if not, just expand this thread). Well here's another upcoming handset from Indian licensee Optiemus to haunt you: the BlackBerry Ghost Pro. pic.twitter.com/1TcyhE3CsLMarch 22, 2018

There isn’t too much information available about other specifications of the phone, but Singh did say that the upcoming devices will have the DTEK app. In the age of Facebook’s Cambridge Analytica and Google’s CCI fine, the DTEK app is supposed to monitor the security of the phone in real-time. Another feature that Singh spoke of was the BlackBerry Hub, which will bring all the communication features under one head.

The upcoming Ghost deviates from the first device that BlackBerry brought to India since Optiemus got the license. The KEYone was known for its QWERTY keyboard but the Ghost is will be all touch screen. The first device will also cost a whopping Rs 39,999.

The premium pricing of BlackBerry phones isn’t going to go anywhere according Singh as he explained in a nice little anecdote - “The cheapest Mercedes will still sell for Rs 25 lakhs and not at the price of a Maruti. Similarly, you can’t expect a Blackberry to come at a really cheap price, because there are some basic things we need to do to make a BlackBerry into a BlackBerry.”

Singh went further to explain that the price difference exists due to the basic DNA of BlackBerry phones, the optimisation of privacy, security and convenience. He said, “These three are a given in any BlackBerry device. Even if the price is Rs 20,000 or Rs 40,000.”

He’s not wrong since it’s impossible to root a BlackBerry phone, even if it’s running Android. And quite honestly, the DTEK feature seems worth the bargain as privacy concerns increase day-by-day. Whether or not consumers will deem their data worth the price point is another question.