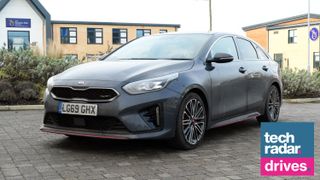 The Kia ProCeed aims to provide good looks, versatility, and agility in one relatively affordable package.

Aimed mainly at couples and young families, there’s plenty of luggage space plus enough room for two adults, along with a couple of kids in the back.

That puts the ProCeed in a competitive place, under-cutting the big names with only a few compromises along the way.

The Kia ProCeed GT is long and low, providing a sporty look which hints that this particular car isn’t a slouch. It has a more aggressive stance than its sibling, the Kia Sportswagon, which provides it with a more professional, premium air compared to the more practical Sportswagon.

Pop yourself into the driving seat, and the sports seats ensure you feel comfortably nestled in position. Headroom is at a bit of a premium, although we (189cm/6ft 2) were able to sit up once we’d put the seat in its lowest position.

Up front there’s ample room for driver and passenger, with the addition of heated seats and a heated steering wheel proving very welcome during the winter months.

The interior is functional rather than fashionable. There are splashes of leather on the door panels and parts of the dash, but there’s still a plentiful amount of plastic, and the controls lack the premium aesthetic finesse of those in the likes of Audis, BMWs and co. However, considering the price of the ProCeed it’s hardly an issue.

Something which is a little more frustrating is rear visibility. The rear window has been formed at a sweeping angle, to allow for a sportier look on the exterior, but this has led to a limited view when glancing in the rear view mirror.

It’s worse for taller drivers, where the angles don’t work out particularly well - while shorter drivers will get a slightly better line of sight. The wing mirrors are a good size though, and when it comes to parking a reversing camera is present to help guide - more on that later.

Press your foot on the brake and hit the Start/Stop button sneakily hidden just behind the wheel and the 1.6 litre engine rumbles to life, with a noticeable idle exhaust note.

Slide the automatic 7-speed gearbox to drive and you can pull away smoothly, with the ProCeed moving up the gears well. It does complain a little if you plant the accelerator at low speeds as it looks for traction, but if you’re a little softer it will glide up the ratios without a fuss.

The ride is noticeably stiff however, and you’ll feel the various lumps and bumps in the road surface. It’s not uncomfortable as such, but we’ve had smoother rides.

Things get even stiffer when you press the Sport button next to the shifter, but the exhaust also gets raspier, which is always nice when you want to have a bit of fun. You’ll feel the force of the turbo a little more in Sport mode, and there’s a paddle shift option if you want to have a little manual control between the gears.

Get out into the country a little and the ProCeed provides its moments of fun, staying relatively tight around corners and with enough pick-up and exhaust noise to keep you engaged on the straights.

You can cruise easily on motorways, and the adaptive cruise control is easy to use with on-wheel controls and the ability to set the distance between yourself and the car in front, with the ProCeed automatically slowing and accelerating with the leading vehicle.

Paired with lane assist, which keeps you in lane, the Kia ProCeed can be a relaxing way to burn through long journeys.

The Kia ProCeed GT has tech such as auto lights, auto wipers and climate control, but the main focus when it comes to technology is the 10.25-inch touchscreen display which sits atop the centre console.

Kia’s interface is simple to use, quick to load, and the screen is responsive to the touch, making interaction easy. The built-in sat-nav works well and relays directions to the 4.2-inch colour screen in the instrument cluster for safer, at-a-glance route checking.

This small display can show a host of different things, including fuel consumption, trip stats, tyre pressure, speed, and driver aides, plus it has a menu of various settings for more driving functions and car setup features.

Back to the larger display and you have access to DAB digital radio, and there’s also the option to pair your phone via Bluetooth and stream music from your handset to the car’s JBL speaker setup.

For those who want greater smartphone control, you can connect your iPhone or Android handset to the Kia ProCeed via the USB port hidden under a sliding cover in front of the gear shift.

This allows you to take advantage of Apple CarPlay and Android Auto, giving you access to apps such as Apple Maps, Google Maps, Messages and Spotify - all from the touchscreen of the ProCeed.

Pop the Kia ProCeed into reverse and the view from the rear-facing camera is shown on-screen, with guidelines helping you navigate the car into parking spaces, along with parking sensors all the way around the car alerting you when you’re getting a little too close to other objects.

While it’s useful to have, it’s not the highest resolution camera we’ve seen on a car and it struggles in low light to provide a clear picture.

Overall though, the Kia ProCeed GT is well equipped and should satisfy most drivers with a penchant for tech options. It may not be the most premium, or powerful, in its class, but the compromises are few and far between, ensuring you still get plenty of bang for you buck.