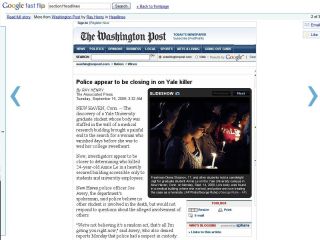 Google has decided that reading news online is too slow.

Writing on the official Google Blog, Krishna Bharat, a researcher at Google News, bemoans the fact that a media-rich news page can take up to 10 seconds to load over a broadband connection.

"What we need instead is a way to flip through articles really fast without unnatural delays, just as we can in print," says Bharat.

"The flow should feel seamless and let you rapidly flip forward to the content you like, without the constant wait for things to load."

And so Google has today launched a new tool in its Labs section called Google Fast Flip.

Fast Flip allows you to flick through screengrab images of web pages by hitting the right and left arrow keys. Clicking an image takes you to the originating web page.

Unlike Google News, which shows a headline and opening sentence from a site, Fast Flip shows as much of the story as will fit into the screenshot, which in some cases could be the entire story.

Perhaps sensing a backlash from publishers, Google serves ads against the content and shares that revenue with the publisher. Google has also refrained from rolling out the service to cover every site that appears in Google News - instead it has partnered with a selection of publishers which include the New York Times, Salon, Fast Company and the BBC.

"The publishing industry faces many challenges today, and there is no magic bullet," he adds. "However, we believe that encouraging readers to read more news is a necessary part of the solution. We think Fast Flip could be one way to help, and we're looking to find other ways to help as well in the near future."