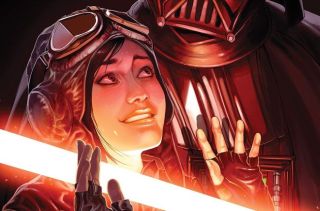 Star Wars has introduced many new characters since Disney took control of the franchise. As you’d expect, the really memorable ones have all been on film or TV - with one major exception. Doctor Chelli Lona Aphra is an archaeologist with an, er, flexible attitude when it comes to conventional morality.

Created by writer Kieron Gillen and artist Salvador Larroca, Aphra was introduced in issue 3 of their Darth Vader comic, back in 2015. Accompanied by a pair of deadly droids – Triple Zero and Bee-Tee – she struck an immediate chord with readers and has since gone on to star in a solo book of her own. We caught up with Kieron to find out more about the character’s creation and why he thinks she has become such a fan favorite.

First off, how would you describe Doctor Aphra to those new to the character?

Was the character originally inspired by anyone, either in terms of character, or her look?

On the first trip to Lucasfilm, when we were pitching Darth Vader, we were taken on a tour. Vader is someone defined by his laconic nature. I also didn’t want to let the reader inside his head – I wanted us to watch him at a distance, and never quite be sure what he was going to do. Those two things in a comic create a problem – namely, I needed someone else to talk a bunch and do the necessary exposition. And, ideally, someone to be a comic foil to add some lighter notes. And I wanted to create a mirror version of the main Star Wars cast, with Darth as surrogate Luke. So I needed a Han-ish rogue-y figure, but I wanted to hit another archetype that was just as striking as the smuggler and…

I was walking on this tour, chewing all this over and passed an Indiana Jones statue. I stood there and thought, “You know – ethically-inverted Indiana Jones. That’d be a lot of fun.”

I gave some notes to Salvador Larroca on her look, but left it wide open for him. The iconic look is 100% him.

Why did you choose to make her an archeologist?

Bar all of the above, I was aware that an archeologist would work really well with the clean new canon. It’s not as if the old ideas were off the table full-stop. They could be reintroduced as and when they served a plot – so an archeologist who goes about literally unearthing and exploring stuff could be a great tool for that.

Aphra was big right from the start, but how soon did you realize that the character had struck a chord with readers?

The first clue should have been the issue she debuted in going to however many kerzillion printings, but I didn’t take it for granted at any point in my run. Part of me still feels it’s almost sacrilegious adding a figure who’s stood alongside Luke, Leia, Han and everyone else. I get to do that? Man!

When we first meet Aphra, she ends up working for Vader. Tough boss! How would you describe her relationship with him?

Strained. Strained in a “she has been tied to a rack and is having her limbs stretched” way. One of the emotional throughlines of my run on Darth Vader was, “Is Vader going to kill Aphra?” Hell, not even “if” but “when.”  Yet at the same time, she is fascinated by the experience, and everything she learns. She knows the best way to avoid being killed is to keep on being useful, so she keeps on striving – and when that fails, she schemes, and tries to wiggle free from that force-grip. Metaphorically speaking, but I guess literally speaking a few times too.

Even knowing how utterly lethal he is, Aphra seems compelled to stick with him in those early issues. Does she have a death wish?

I think that’s one of the core compelling parts of the character – this mix of a death wish and an absolute desire to stay alive. That leads to one of the other compelling things about her – what will she do when her death wish gets her into trouble?

Aphra is the only non-film/TV Star Wars character to receive a dedicated solo book. Did putting her front-and-center change the way you thought about and wrote the character?

To return to an earlier question, I suspect that when I realized that she was the only non-film/TV character to have her own book was the moment when I realised what lightning in a bottle she was. And, yes, that did change it. She’s no longer Vader’s foil, but a lead. That meant that I had to build a cast around her in the same way I built one around Vader – and most of all, dig into her background, what made her the way she is and so on. And try and hit those pure Aphra beats as possible.

Most characters in Star Wars have clear allegiances, but Aphra happily swaps sides. Are there any moral lines that she won’t cross? Does the character ever surprise you in how far she'll go?

Your question is the absolute core question with Aphra. What won’t she do? What will she do? The best stuff with Aphra is always bouncing on that axis. A moment when she shows that she’s not that bad… and then a moment which shows her that she absolutely is. And there’s always the possibility that a thing she won’t do in one situation she will do in another. She keeps you guessing.

Aphra has since been written by numerous folk other than yourself. How does that feel? Is it strange watching other people play with your creation?

Weirdly, it makes her more real. She has a life away from me, which means she isn’t just a figment of my own imagination. She’s off there, causing trouble. It’s a delight. She’s all grown up.

Aphra’s solo book is being relaunched this year with the new creative team of Alyssa Wong and Marika Cresta. Are you involved in this in any capacity? Is there anything you can say about it?

Just that I’m excited about it. That I don’t know anything at all adds to the appeal. It’s going to surprise me as much as you. I was co-writing the early part of Si Spurrier’s run, so I knew the direction he was taking it, but I only know Alyssa through her excellent work in prose, and I can’t wait to see what she brings to a comics ongoing generally and Aphra specifically. Marika’s a really strong action storyteller with that sort of charm to her characters which is really needed on a character like Aphra.

How does it feel to have a character that you created become such an integral part of the modern Star Wars universe?

I’ll tell you what. I’m sitting here, and look up from the screen, and see a figure of Doctor Aphra, alongside Trip and Beetee. It feels weird. Delightfully weird.

Finally, what do you think makes a great Star Wars character?

I’m not someone who likes to generalize about fiction, but I often compared the process of writing Star Wars to playing the blues. It’s got a structure. You know how it goes. If you change that compelling heart, you end up with something that doesn’t feel like Star Wars. Part of that is characters who have a strong, pure iconic resonance – a really simple CORE, which you then build on. You can describe them in a sentence… but there’s a lot more to them in the execution, the fractal nature of personality. And that’s the kind of overthinking which led me to something like 'Rogue Archeologist.'

Doctor Aphra #1, by Alyssa Wong and Marika Cresta, will be published by Marvel Comics in April this year. You can catch up on Doctor Aphra with Marvel Unlimited.