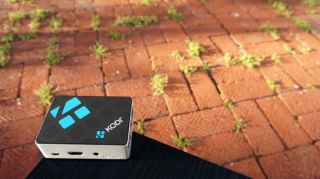 For years Kodi (formerly called XBMC) has been the defacto standard in media center software, and its openness has meant that there's no shortage of boxes to install the software on.

One of the most popular pieces of hardware to install Kodi on is the Raspberry Pi. It's cheap, it's small, and yet it's got enough power to handle streaming all your media.

Now Kodi is partnering with FLIRC to produce an official Kodi-branded Raspberry Pi case, but you'll still have to buy the Raspberry Pi board itself separately.

Not just a pretty face

This housing isn't just for aesthetics. The aluminum casing works as a passive CPU heatsink, meaning that if you want to overclock your Pi you now have more thermal headroom to do so.

The case supports all models of Raspberry Pi, but you should know that if you plan on using a Raspberry Pi 3 then the LED light won't work and you'll have to remove the bottom cover to access the SD card slot.

Unfortunately for now the case is only being released as a limited edition, but here's to hoping it manages a more permanent run in the future.

You can get your hands on the case through Kodi's official website.