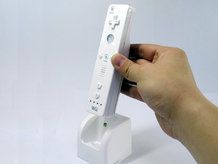 Nintendo hits back at patent trolls

As reported earlier, the US International Trade Commission (ITC) is investigating claims made by Hillcrest Labs that Nintendo has infringed some of its motion control technology patents with Wii.

"As expected, the International Trade Commission signalled its intention to investigate the importation of Nintendo's Wii and Wii Remote based upon a complaint filed by Hillcrest Laboratories Inc."

"Nintendo has not yet had an opportunity to respond to the complaint and the Commission has not made any determination on the merits of the case," Nintendo's statement continues.

"Rather, this preliminary step in the process is based solely on the allegations of patent infringement contained in the complaint filed by Hillcrest. After a judge is assigned to preside over the investigation, Nintendo will have the opportunity to present its case.

"Nintendo respects the intellectual property rights of other companies, and believes that none of its products infringes the Hillcrest Laboratories patents. Nintendo intends to vigorously defend this action."