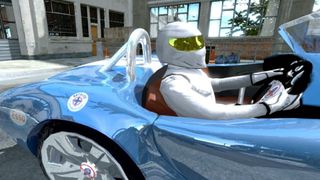 Over at MWC 2016, Imagination has been busy showing off its real-time ray tracing trickery running on the firm's quad-cluster PowerVR GR6500 GPU, a chip small enough to fit into mobile devices.

What's so great about ray tracing? Normally, when programming a game, the graphics have to be done and then realistic lighting effects such as reflections and shadows (and other visual effects such as transparency) have to be added on top in an often very lengthy process.

Ray tracing, however, boils this process down and simplifies things to make it a far less stressful endeavour. Imagination told us: "What you do is you define properties for the materials. You shoot some rays and the computer creates the reflections for you. Instead of having to program shadows and reflections, you just have to use ray tracing to do that."

As you might guess, however, this is demanding on graphics hardware, but Imagination's new PowerVR GR6500 with its Wizard ray tracing tech is set to deliver such nifty visuals to smartphones and tablets, as it's small enough to fit in these mobile devices. (Although it's also highly scalable, and thus aimed at the likes of laptops and games consoles as well, if you bundle up multiple GPUs together for a multi-core solution).

There's a lot crammed into the GR6500, and Imagination claims that it's around 50 times more efficient than an Nvidia desktop GPU when it comes to ray tracing, graphics or compute workloads.

That's quite some boast, and the company notes that for ray tracing duties, you would require around 600 square millimetres of Nvidia GTX GPUs.

The MWC demos Imagination is showcasing boast some impressive-looking scenes, including one which features zombies prowling the eerie streets of a deserted city (which uses an experimental version of the Unity 5 game engine that supports the Wizard ray tracing technology). Check it out above.

Doubtless we can expect to be hearing a lot more about this soon, and Imagination reckons that a games console boasting two to three teraflops in performance could be realised using four of these compact power-packed GPUs.