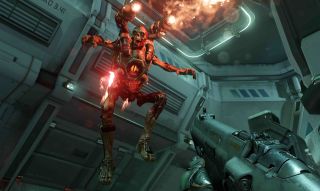 It's been a long and bumpy ride, but Doom will arrive on May 13, Bethesda has announced.

The game, which spent years in development hell before being sent back to the drawing board, is technically the fourth instalment in the influential franchise.

The reboot will hit PS4, Xbox One, and PC, and will include a single-player campaign, a multiplayer mode, and a map customisation feature.

In addition, Bethesda has announced a Collector's Edition which includes a 12-inch tall statue of the Revenant demon and a fancy metal case.

To mark the occasion of a locked-in launch date, Bethesda has also released a new trailer showing off some of that campaign, featuring plenty of blood, guts, and a smattering more blood.