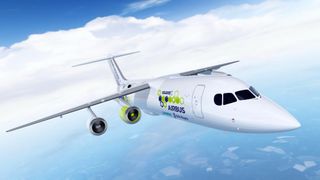 Air travel is a leading cause of carbon emissions, and the rise of cheap flights over the last decade or so has only made the problem worse. If you've ever spent any time considering your personal carbon footprint, then you'll probably have concluded that you should be flying less.

But in the future, you might be able to rejoin the jet-set with a little less guilt. An international consortium of companies - Airbus, Siemens and Rolls-Royce - is working on a hybrid passenger plane that works a little bit like a hybrid car.

The aircraft will be based on the existing BAe 146 four-engine jet - with three conventional jet engines running on aviation fuel. But unlike other planes, those jet engines will generate electric power through a turbine within the plane. That power will be use to turn the blades of an electric turbofan engine.

The plan is that Siemens will make the electric motor, Rolls-Royce will make the generator and turbo-shaft engine, and Airbus will integrate those systems into a working whole. A first model is in the works for 2020, and the companies say that if it works well then a second electric motor could be added to the designs.

The goal, of course, is to reduce CO2 emissions - the European Union has a goal to drop emissions by 60 percent. But the electric motor will also help meet noise and pollution limits.