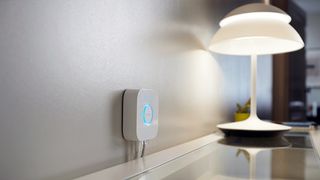 Update December 26: Only a day after its original announcement, Philips has reversed its decision to block third-party light bulbs on Philips Hue.

Following negative backlash, Philips said it underestimated the impact the decision would have on "the small number of our customers who currently use uncertified lights from other brands in the Philips Hue system."

The company is currently working on an update to undo yesterday's ban and plans to alert users "shortly" when it's available.

Digital rights management has come to home appliances as Philips announced it won't support third-party bulbs for Philips Hue. The smart home lighting system will eventually have more options for bulbs, but anyone looking to go off the proprietary path may encounter obstacles.

Philips announced its latest update as fixing an "interoperability issue," citing that certain third-party light bulbs wouldn't operate properly with its Hue system, either not turning off successfully or properly working with the Hue's "scene" functionality.

Up until now, owners of Philips' light framework could use typically cheaper bulbs from other brands such as Cree or GE that were compatible with the system. However, as Hue updates its platform, several of these bulbs were unable to keep up and showed performance bugs.

Rather than working out issues with each individual product, Philips is putting Friends Of Hue in effect, a program in which brands can undergo testing to meet Hue's standards. Products that make it into the Friends Of Hue circle will work after the update is applied, making them the only current alternative to Philips' proprietary light bulbs.