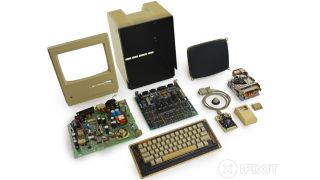 It's a teardown 30 years in the making. The original Apple Macintosh, now known by its alternate name Macintosh 128K, has received proper teardown treatment for its 30th anniversary.

The pulled-apart specs include an 8 MHz Motorola 68000 processor, 128 KB DRAM and no internal storage. That's what the 400KB single-sided 3.5-inch floppy disk drive was for.

Everyone's peepers had to focus on a 9-inch CRT display with a 512 x 342 (72 dpi) resolution and it was black and white, noted decade-old iFixit of the three-times-older Mac.

The price included a single-button mouse (complete with rubber mouseball) and a "hefty keyboard." The keys were individually soldered on, making the repairability score 7/10. That's still better than today's Macs.

Good news. Your PC has more than 128 KB DRAM and can handle more blips: