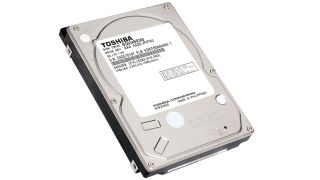 Toshiba unveiled a new 3TB hard disk drive that's crammed into a 2.5-inch form factor. The MQ03ABB300 is the smallest such hard disk drive and kickstarts another potential round of product launches.

The drive uses perpendicular magnetic recording (PMR) and uses four 750GB platters to achieve this capacity. Expect this particular model to be a 15mm model like its predecessor with 8MB buffer and a 5400RPM.

That means that you won't find it in any laptops as it is too thick (most take either 7mm or 9.5mm ones) or in the Sony PS3 or PS4 gaming consoles (but you can connect them externally).

Toshiba has already unveiled a couple of external hard disk drives based around the new drive; the 3TB Canvio Basics will be available later in March for $190 (about £125, AU$234).