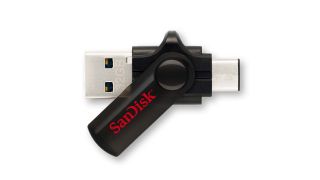 The 32GB flash storage drive has built-in connector tips for both a full-size USB and Type C ports so users won't need to carry additional cables or adapters.

Both the Dual USB Drive and the iXpand Flash are essentially USB storage drives that can plug into either a computer or a compatible smartphone. This allows users to copy files from the PC or the phone to the drive for backups and to free up limited storage.

Betting on the mobile future

While phones with USB Type C ports aren't readily available on the market yet, Strategy Analytics predicts that 12% of handsets will feature the connector by 2016. USB Type C will replace the standard micro USB 2.0 or USB 3.0 port on smartphones today, providing for faster transfer speeds.

The Type C port is also believed to be headed to Apple's unannounced Retina MacBook Air and Windows 10 devices.

For consumers, the biggest gain with the Type C plug is its reversible design. Similar to Apple's design for the Lightning connector, Type C doesn't have a top or bottom end so you can plug in the tip without even having to look at the orientation of your cable.

SanDisk is also targeting smartphone owners with a new higher capacity microSD card. Up from the 128GB maximum today, SanDisk's new 200GB Ultra microSDXC card brings more storage space to smartphones and tablets. The 200GB card is slated for a launch in the second quarter with a $399 (£260, AU$515) price tag.