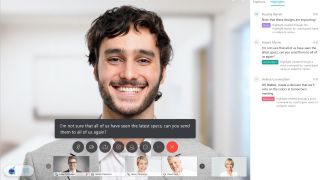 Webex Meetings are about to get a whole lot smarter as Cisco has announced that it is is adding new AI-powered voice intelligence capabilities to its video conferencing solution.

The Cisco Webex Assistant for Webex Meetings is powered by technology from the firm's recent acquisition of Voicea and it aims to turn meetings into a digital treasure trove for business users.

Senior vice president and general manager of team collaboration at Cisco, Sri Srinivasan explained how the company's new AI-powered assistant will help businesses save time in a press release, saying:

"Voicea users have reported saving more than six hours per week per user with more actionable and efficient meetings – and we believe Webex users will experience similar results. We're excited to bring this and other cognitive features to the 300 million users we already serve with Cisco Collaboration. This technology will fundamentally change how we are able to deliver massively personalized experiences and transform the way we work."

Cisco's Webex Assistant for Meetings is the first digital in-meeting assistant aimed at the enterprise and it will allow users to automate mundane tasks such as taking notes, transcribing and follow-up so that employees can focus on the meeting.

In addition to providing closed captioning and instant transcriptions, users will also be able to tell Webex which points to highlight. The recorded transcripts are even searchable across meetings with speaker labeling so that everyone knows who said what during a meeting. Catching up on missed meetings is also easier thanks to the Webex Assistant as users can simply skim meeting highlights.

Back in 2017, Cisco added conversational AI to Webex Rooms and with Webex Assistant for Webex Rooms, users will be able to join meetings, make calls and control room devices with just their voices. However now, the company has added Spanish language support so that users can speak in either English or Spanish to Webex Room devices and Webex Assistant will respond in their preferred language.

Cisco also announced that it is giving customers a choice as to whether their Webex Teams data, which includes users, keys messages and files, will be stored in Europe or the United States for both regulatory and security purposes.