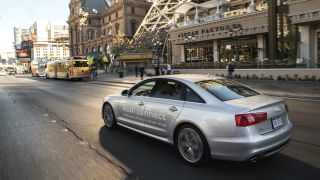 The motoring industry has long bragged that the cars of the near future will be driverless, but it seems someone forgot to mention it to the world's cities.

For self-driving cars to become a reality, there's an enormous amount of infrastructure (and legislation) that needs to be in place beforehand, but a new study's revealed that 94 per cent of the world's cities are failing to prepare.

Conducted by the National League of Cities, it claims that only six per cent of the 68 cities included in the study have long-term transportation plans that take the future effect of driverless cars into account. And while Audi's promised driverless cars by 2016, if cities lack the vision to support such an endeavour the benefits will be lessened considerably.

One example of the impact that forward planning can have is the current cooperation between Audi and Somerville, near Boston. The project sees Somerville's Assembly Row neighbourhood being outfitted with a specially designed car park that will accommodate both self-parking and traditional cars.

Audi believes that by taking human error out of the equation, its self-driving cars will require car parks that take up 60 per cent less space than their human-piloted siblings. But, as the study reveals, without the inclusion of such infrastructure in long-term transportation plans, such benefits will be diminished.

Self-driving cars aren't alone in being overlooked either. The study also found that only three per cent of cities' plans acknowledged the existence of services like Uber, despite such services currently operate in 88 per cent of them.

By ignoring services like Uber, which have changed the way people get around, and the further changes that'll come with the driverless car, our cities risk missing out on a whole host of benefits, from reduced congestion to minimised road fatalities.