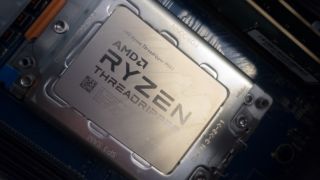 According to a fresh leak, AMD’s flagship Ryzen Threadripper 2nd-Generation processor with a monster 32-cores will launch on August 13, alongside a 24-core sibling CPU.

So we have to take this with the usual pinch of condiments, but if this speculation is on the money, you could be able to buy the flagship core-bristling CPU in just over a month’s time.

The Threadripper 2990X is rumored to have a base clock speed of 3.4GHz with boost to 4GHz (and the possibility to drive up to 4.2GHz on a single core). With 32-cores, it has twice as many cores as the previous-generation flagship (Threadripper 1950X), and even outstrips Intel’s incoming monster 5GHz processor which has 28-cores.

How steep a price?

So, if you’re after a relatively affordable processor with a core count that will make other PC owners weep, the wait is seemingly nearly over.