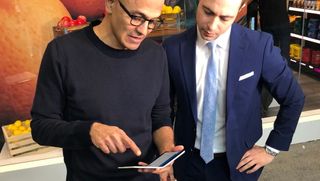 Must be nice being the boss. While the rest of us will have to wait until the end of 2020 to get our hands on Microsoft’s innovative dual-screen Surface Duo device, CEO Satya Nadella has been spotted using an early version.

According to a tweet by Brian Sozzi, Editor-at-large of Yahoo Finance, Satya Nadella casually pulled out the upcoming foldable handheld in public – and Sozzi was impressed with what he saw, calling it a “darn slick device”.

Since Microsoft announced the Surface Duo back in October 2019, Nadella has revealed that he’s already using it, telling GeekWire: “I look at the way I use both my Neo and Duo now and I want to carry it with me everywhere. I want to be able to open it up, take notes. It’s a beautiful pen-first experience.”

While the Surface Duo, and its larger Windows-powered counterpart the Surface Neo, are still months away from being released, it’s clear that Microsoft – and Nadella – are feeling pretty confident about the Surface Duo already, seeing as Nadella is happy to show it off in public.

Hopefully, this confidence means we’re in for a real treat when the Duo launches later in 2020.

Even though the Surface Duo isn’t releasing any time soon, we do know quite a bit about it already. It runs on Android, and comes with dual 5.6-inch screens that allow it to be folded up and slipped into a pocket.

It can make and receive voice and video calls – although Microsoft insists it’s not a smartphone. It can be unfolded and used as an 8.3-inch tablet-like device, and Microsoft is said to be working closely with Google to make Android apps that are suited to the dual screen setup.

In fact, considering the fact that Microsoft is showing off the Duo so early, yet not releasing it until the end of 2020, makes us think that while the company is pretty happy with the hardware side of things, the software still needs to be worked on.