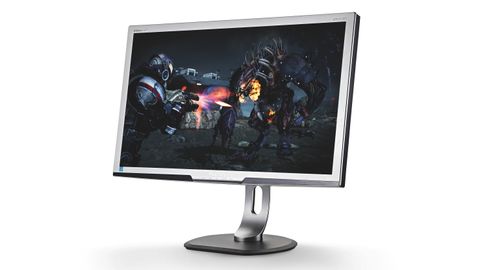 The start of the panel tech wars?

Low-cost 23-inch IPS panels are all the rage right now, but what if you've a little more to spend on a monitor and fancy something bigger, something more dramatic, perhaps something more cinematic? If that sounds like your bag, the new Philips Brilliance 273P3QPYES would like a moment of your time.

It's a 27-inch beast with a premium panel. But this time, it's not IPS but AMVA.

If you're wondering what that means, the simple version is that this is a Vertical Alignment or VA screen. Historically, that's made for really rich colours and the best contrast and black levels of any LCD screen.

However, VA also tends to come up short regarding horizontal viewing angles and pixel response. So the Philips Brilliance 273P3QPYES is both intriguingly placed and has plenty to prove.

There are several gaming and media-orientated screens with TN panels, such as the BenQ XL2420T, available for significantly less than the Philips' £350 asking price, and fellow Philips model, the Philips Brilliance 248C3LHSB.

Meanwhile, the Hazro HZ27WA matches the Philips' 27 inches and adds IPS technology and a much higher native resolution.

With IPS experiencing a resurgence and TN technology still dominant at the low end, we haven't seen too many VA screens of late. So, it's nice to get back into the saddle and experience what the latest generation is capable of.

Its most obvious strengths are colours and contrast. This panel pops with visual pizazz, thanks to spectacular colours and really super black levels.

Thanks to the LED backlight and a smooth, near grain-free anti-glare coating, this monitor also delivers superbly clean and consistent whites, too. It mostly sailed through our suite of test images, cranking out perfect gradients and loads of detail and fidelity in the various black, white and colour scales.

Another upside is the fully adjustable stand, which makes life so much easier when it comes to getting the monitor properly positioned for serious work or just great gaming. It's nice to have the choice of DVI, DisplayPort and VGA connectivity, too.

If that's the good news, the bad is that one or two of the traditional niggles that effect VA panels make an appearance on the Philips Brilliance 273P3QPYES.

For starters, while the vertical viewings are impeccable, the horizontal or side-to-side angles are notably less stellar. What's more, the pixel response is a little off-key. Philips has included three levels of user configurable overdrive to offset this particular VA weakness. But crank it up to the max and our old friend inverse ghosting saunters into the frame.

When it comes to colours and contrast, you can't beat a VA panel.

Consequently, the Philips Brilliance 273P3QPYES looks that little bit richer and more vibrant than even the best IPS monitors, which is great for HD video.

It has a great stand and plenty of inputs, too.

Meanwhile, the dated appearance of the chassis is a bit off-putting at this price. Hardcore gamers will probably prefer better pixel response, too.

The Philips Brilliance 273P3QPYES is great for watching HD video content, but flawed for desktop productivity and gaming.