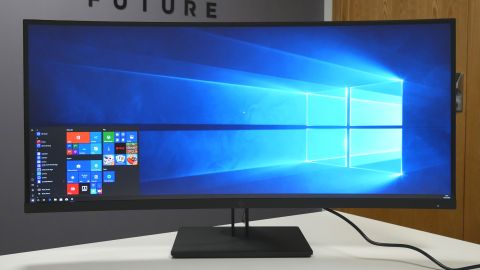 Large format 4K displays with the conventional 16:9 aspect ratio are the obvious choice at the higher end of the PC display market. But not actually the only option. Enter the new HP Z38c, an ultra-wide, slightly curved computer monitor with a not-quite 4K native resolution.

At 38 inches and with a gentle 2300R curvature, the Z38c is certainly spectacular. It also meets the 4K standard on the horizontal plane with 3,840 pixels. But thanks to the extreme 21:9 aspect ratio, the vertical pixel count is capped at 1,600.

In other words, it’s not a full 4K monitor, despite the gargantuan panel size and equally enormous price tag. That will count against the Z38c for some users looking for high pixel density. However, it is well featured, with USB C connectivity including charging support.

At £996 or $1,199 in the US, the HP Z38c actually slightly undercuts comparable 38-inch displays from LG and Asus, though feature sets do vary between models. It’s still pretty pricey for a monitor that lacks HDR capability. But with features like USB C connectivity, it’s a strong overall package despite the premium price.

The HP Z38c is not the first 21:9 aspect premium monitor to hit the market. LG did it first with the 38UC99, a monitor that matches the HP nearly spec for spec. The Asus MX38VC is another. In fact, they all use 38-inch 21:9 panels produced by LG, hence its first mover advantage.

It’s an IPS panel, which bodes well for colors and viewing angles. However, as the quoted 700:1 minimum and 1,000:1 typical contrast ratio implies, the panel isn’t quite at the cutting edge of current technology. For starters, the refresh rate is limited to 60Hz, there’s no HDR support and HP claims 14ms for the pixel response performance, albeit that is for full on-off response rather than the more commonly quoted grey-to-grey. Nor is the Z38c fitted with a backlight supporting local dimming.

Anyway, this isn’t a bleeding edge monitor with HDR this and quantum dot that. Its appeal is panel size and shape and the ergonomics that brings when it comes to productivity and content consumption. The 3,840 by 1,600 native resolution is a significant step up  from the more common 34-inch form factor, which typically offers 3,440 by 1,440 pixels.

To that you can add an array of appealing features and physical qualities. First up is USB C connectivity with charging support up to 65 watts. That means you can connect compatible laptop PCs and MacBooks to the HP and not only drive the display and charge the laptop at the same time, but also connect peripherals.

It’s basically a single-cable connectivity solution that’s entirely analogous to docking. You simply plug in a single cable and you’re good to go, including additions like a proper mouse, which can be left connected to the display. Once you’ve tried it, you won’t want to go back to plugging in three or four cables to get the same functionality from a conventional monitor and laptop combo. For the record, DisplayPort and HDMI connectivity is provided separately from the USB C hub.

The Z38c also also boasts a truly gorgeous chassis and stand. It’s one area where it stands out from the Asus and LG competition - the sheer quality of materials and build. The stand also offers a wide range of adjustment including tilt, height and swivel. It doesn’t support rotating into portrait mode. But given the ultra-wide panel aspect and the curvature, that’s no surprise.

3,840 by 1,600 pixels sounds like a lot. It is a lot. But stretched out over a 38-inch diagonal, it doesn’t actually make for a terribly tight pixel pitch. In fact, it works out at just 109 pixels per inch. A high DPI display this most certainly is not. For context, Apple’s Retina displays for desktop and portable machines have four times the pixel density.

This is most obvious with fonts, which aren’t as crisp and sharp as a truly high-DPI display. However, with such a large superwide panel, the Z38c remains excellent for viewing multiple webpages and documents side by side. Up to four can be comfortably viewed in parallel. You can also, for instance, give an application like Photoshop nearly as much screen space as a whole 34-inch panel while also running a web browser or viewing a document to one side. This monitor is truly a multi-tasking powerhouse.

As for image quality, it’s largely as expected given the specifications. It’s not the brightest or punchiest display and the contrast levels are merely adequate. But thanks to the IPS technology, the viewing angles are great and the colors look natural and convincing. As for actual color accuracy, HP says merely that the Z38c is capable of 98 per cent of the sRGB gamut and makes no further claims for the likes of the Adobe RGB or DCI-P3 spaces. Of course, it doesn’t support HDR content at all.

On that note, the OSD menu offers presets of sRGB and BT.709 gamuts, and that’s it. There’s no preset for Adobe RGB, DCI-P3 or other even more demanding gamuts. For reference, HP’s own Z31x Studio Display is quoted at 100 per cent of both sRGB and Adobe RGB and good for 99 per cent of DCI-P3.

The upshot of which is that the Z38c probably isn’t the best choice for absolutely color critical content creation work. It’s more of a general purpose productivity workhorse, in which remit it definitely delivers.

In this age of HDR and high fresh displays, the HP Z38c is a relatively old school proposition, despite its superwide aspect ratio and curved panel. It doesn’t offer support for HDR content, nor can it be driven at really high refresh rates. It’s also worth noting the relatively low DPI that’s a consequence of the 38-inch diagonal. If you want really sharp fonts, a smaller 4K monitor is a better bet. The Z38c isn’t not specified for demanding color-accurate content creation, either.

What it is good  for, however, is multi-tasking productivity on a fairly epic scale thanks to the huge 38-inch panel. It also scores highly for general productivity thanks to USB C connectivity and a very high quality chassis and stand. As a serious productivity machine, then, Z38c has loads going for it.