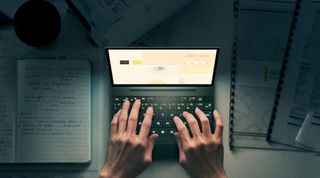 Netbooks used to rule the lightweight laptop market, but recently many devices have been replaced by new offerings from Android manufacturers.

However following recent revivals from retro games consoles and vinyl players, Chinese company Magic Ben is now hoping to revive the Netbook trend with a new device called the Mag1

Despite measuring just 20.7 x 14.6 x 1.8cm - a footprint almost as small as an A5 sheet - with a weight of less than 700g - the Mag1 actually has more ports than an Apple Macbook, sporting a full size USB 3.0 port, Type-C connector, microSD card reader, an audio socket and a micro HDMI port.

Magic Ben Mag1 ultra portable laptop, only $790 at Gearbest. Small, light, slim yet powerful, the Mag1 is full of surprises, and is far more affordable than some higher-powered competitors. View Deal

The Mag1 manages to pack some high-end components like an Intel Core M3-8100Y CPU, 16GB memory and a 512GB SSD. However its touchscreen display, with a 16:10 aspect ratio and a resolution of 2560 x 1600 pixels - remains its biggest selling point.

Add support for a stylus pen, a backlit keyboard, a fingerprint reader and a spare M.2 port and you get a rather enticing laptop with an incredibly small footprint for a mere $789.99 at Gearbest.

Despite its tiny volume, it comes with a 30AHr battery which the manufacturer claims will power it for up to seven hours. As an added bonus you can use a power bank to charge it via the Type-C connector as the latter supports power delivery.