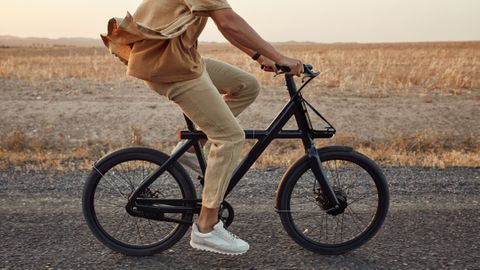 Very cool, very clever, but expensive and with basic parts. Smart features and theft-protection count in its favor, but the VanMoof Electrified X2 lacks elsewhere.

Uber-stylish and seemingly marketed to scare off the lycra brigade, can the VanMoof Electrified X2 achieve its promise and revolutionise city transport?

Potentially, especially given its subscribe-to-ride option, making the jump to an electric bike a little less daunting for first timers. But some cost-cutting measures made by VanMoof prevent it from reaching the greatness the best ebikes achieve.

Read on for our full on-the-road review of the VanMoof Electrified X2.

The standard VanMoof Electrified X2 costs £3,198 / $3398. UK readers can also benefit from a subscription offer that allows you to purchase a smart version of the bike for £848, plus a monthly fee. For those looking to test an ebike without committing to a huge initial outlay, it's a great option.

Available on top of this is theft protection that will see the VanMoof team recover or replace any stolen bike. All VanMoof bikes are available online, or through the brand’s dedicated shops.

In the flesh, the VanMoof Electrified X2 is a stylish and slightly imposing beast. With no flapping cables, derailleurs, or exposed chains, it’s very slick – a facet only boosted when you turn it on and its hidden lights and indicators start flashing.

So neatly integrated, it takes a minute to pick out the bike’s main design features. These include a downtube integrated battery, lights and display hidden in the top tube, an enclosed chain, and automatic two-speed gearing.

Assistance is provided by a powerful 250-500W front hub motor, while mechanical disc brakes do the stopping. To keep everything as minimalist as possible, the Vanmoof’s battery is fixed, so you’ll have to bring the whole bike in to charge it.

Based in the Netherlands, home to the world’s tallest population, VanMoof makes two designs, with the conventionally shaped S2 recommended for riders between 170-210cm, while this cross-framed X2 should suit those between 155-200cm. However, even tall riders should consider the X2 as it’s easier to manoeuvre and includes an excellent integrated front rack that’s absent on the larger bike.

From the off, the VanMoof feels reassuringly solid and its progress is correspondingly stately. Not that it’s slow, just that its powerful motor is well controlled, meaning the bike never feels hurried or skittish, a point improved upon by its voluminous and smooth-rolling Schwalbe tyres. Hidden inside its fat down tube is a 504Wh capacity battery that will give you about 35 miles of lazy use, or more if you pedal harder.

With four levels of assistance, a turbo boost button gives you an extra jolt should you require it, such as when pulling away from the lights, or battling a particularly nasty hill. Also ensuring the VanMoof Electrified X2 makes the most of the power provided by the rider is its automatic two-speed gearing. Using a centrifugal clutch, this changes the gear automatically when you hit a certain speed, meaning there’s no need for rider input in the process. Just as clever are the bike’s more unusual features.

Made up of 166 LEDs on the top tube, its intuitive matrix display is a very cool way of showing speed, along with battery and assistance level. Then there’s the defensive alarm system that’ll ward off thieves, while you can also track your bike if it goes missing. There’s also a rear wheel kick lock that stops the bike from being rolled away.

So what’s not to like? Although it works perfectly, the front hub motor is a little basic compared to the integrated mid-mounted units found on similarly priced bikes. The Sturmey 2-speed hub, although excellent, is also not a particularly expensive bit of kit. Essentially, quite a chunk of the budget is going on the bike’s design and smart feature set.

Luckily these are fantastic, as are the reports we’ve received regarding after-sales care. From the lights integrated into the frame that turn on automatically via a hidden sensor, to the perfectly fitted parcel shelf at the front of the bike, it’s the design and execution of the X2 that sets it apart. Easy to get on with, it’s sure to appeal to non-cyclists. And while bike geeks might think its spec lags on paper, in the flesh and on the road the VanMoof is likely to win many users over.