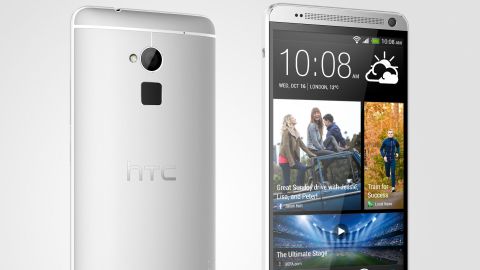 We all know that HTC brought out a wonderful phone with the One, and it's attempted to capitalize on that reputation with the HTC One Mini, and now supersized that again with the One Max.

Despite slight protestations that this could be geared more for the Asian markets, there's no doubt the company will be judged heavily for the One Max in Europe and the US - so does it stand up to the challenge of the Note 3 and Xperia Z Ultra, or is it just a larger One that has very little point?

There are a number of issues to consider: the fact it seems to be a large chunk more expensive than the One, while eschewing the faster and improved processor of the Snapdragon 800. We're waiting on confirmed SIM free pricing, but it looks to be a large amount more than the HTC One, which isn't great considering you're losing a camera function and build quality and gaining only a bigger screen and microSD slot.

The HTC One Max is a phone that takes the DNA of an already great phone and supersizes it. It's a device that excels at web browsing, media playback and content discovery through Blinkfeed.

It's running the latest version of Android, has a much-improved battery life thanks to the larger innards and most importantly manages to keep that power down while still running silky smooth under the finger.

The addition of a microSD slot is something that HTC fans the world over have been clamoring for, and makes the decision not to put the same thing on the original One even more perplexing.

All of the additions to the HTC One party are welcome, in short: the ability to better manage Blinkfeed, the ease with which one can enter the gallery and see video highlights, the 50GB of Google Drive storage - these are all excellent ideas and bolster an already great phone that's been brought up to a larger frame.

But here's the problem: The HTC One Max is almost identical to the One, but with a bigger screen. There's been no attempt to make use of that upgraded size, and given the new features will be appearing on the One in the near future, this means the One Max has very few unique selling points.

Unless you're desperate for a nearly 6-inch screen, that is.

The fingerprint scanner is a real waste of time. Apple has shown us how well this can be implemented as a feature, so putting it on the rear of the device in a hard to reach place is never going to be a good idea.

The One Max is also terribly unwieldy, meaning you're likely to drop it if you try to use it in one hand very often. It could be worse, but those BoomSound speakers do nothing to help the ergonomics.

And it's so expensive. Ridiculously so. We'd have understood if the specs were uprated, but to bring to market something that doesn't even have an improved list over the original (released over half a year ago) this isn't something we can come close to recommending.

We won't pull any punches. The HTC One Max doesn't come close to hitting the heights of the HTC One.

It's a phone that's designed to serve a very singular purpose - give those that liked the look of the One a phone with a bigger screen, and almost nothing else.

Biometrics are going to be big in phones, but not implemented in this way. If you're after a fingerprint scanner on a phone and are brand agnostic (yes, we know, there won't be that many of you) then the iPhone 5S is the way to go.

Put simply, the HTC One Max is just too large and too feature-poor to be considered as a great device in its own right. The Samsung Galaxy Note 3 is at least filled with functionality that's not available on the Galaxy S4, mostly down to the S Pen, and as such is worthy of being called a different device.

The issue of an exorbitant price, and an ageing processor, combined with internet browsers that don't seem as zippy as we'd have expected, is something that anyone looking to buy this will really need to consider.

We're not saying that the One Max is a terrible phone, as it still has all the features that we love on the One, and they're implemented just as well as on the smaller version, meaning you've got a winning device.

However, HTC seems to be doing nothing more than ticking boxes here by making a One with a bigger screen - let's hope that the One Max 2014, if there is such a thing, gains something more of its own identity.