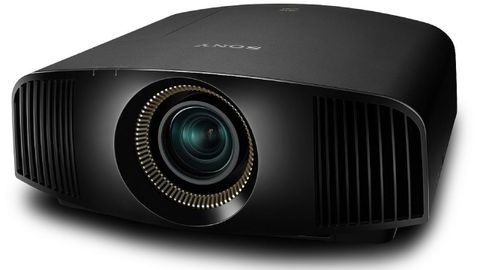 Recommended
All things bright and beautiful

If you've got the money, the space and the 4K source, the VPL-VW300ES is a shoe-in to become the centrepiece of your next home cinema.

Those after a Full HD home cinema projector are unlikely to think of Sony, but mention 4K and there's really only one brand in town.

Since it specialises in ultra high-end projection for large venues, the Sony VPL-VW300ES is something of a trickle-down attempt.

But an entry-level projector costing £5,849? You betcha – that's where 4K home cinema is right now.

Nevertheless, the VPL-VW300ES's eight million pixels do come with a few restrictions you need to be aware with.

The VPL-VW300ES is a home cinema beast.

It's not designed to be used in daylight or, at least, not much. Its 1,500 lumens rank it less bright even Sony's step-up 4K home cinema projector, the VPL-VW500ES.

And its hulking physical size rule it out for occasional use; its 496x195x464mm chassis and 14kg weight has been created for a permanent installation in a dedicated home cinema room.

At the core of the VPL-VW300ES is a Silicon X-tal Reflective Display (SXRD) a Sony-only tech that's essentially a hybrid between DLP and LCD. The key benefit of SXRD is an ultra-fast response, so a lot of that 4K detail ought to remain even during high-octane video.

Image perfectionists will love the the VPL-VW300ES's endlessly tweak-able parameters.

There's a colour-specific correction tool for hue, saturation and brightness, while preset picture modes include the moody yet colour-accurate (and supremely quiet) Reference mode, Cinema Film, 1 & 2, Game, Bright Cinema and Bright TV (both handy for where there's ambient light around during the day, though don't expect too much), among others.

Inputs are plentiful for home cinema. On the side are two HDMI 2.0 inputs – one compatible with HDCP 2.2 – alongside a RS-232C for integrating the VPL-VW300ES into a in-room control system, an Ethernet LAN slot for hard-wiring it into a network, a couple of 12V triggers and a USB slot.

Optional accessories include the IFU-WH1 wireless HD unit and TDG-BT500A 3D specs. The VPL-VW300ES is also 3D-ready, and in the detail-maximising active shutter 3D camp, as you would expect for a 4K machine.

It even upscales 3D into 4K quality. Sadly, it doesn't come with any 3D specs from Sony so I wasn't able to review the 3D performance.

Set-up was simple thanks to a very handy 2x optical zoom and both horizontal and (huge) vertical lens shift, complete with a green screen pattern to help aim the slinky electronic zoom and focus controls on the long, slender remote you get with a Sony TV.

Sony sent me its POP-FMPA60 4K player pre-loaded with native 4K footage from around World Heritage sites in Japan (though Netflix 4K and Amazon Instant 4K will work fine, too). In my test the VPL-VW300ES proceeded to use its Cinematic 4K, 4096x2160 pixels, to devastating effect.

First it was majestic sight of Mount Fuji, watched on a bright afternoon with curtains half-closed. In Bright Cinema mode, the VPL-VW300ES produced just 53 decibels while it sent out well-saturated, bold colours and so-so black levels.

The level of detail, especially with the Reality Creation mode activated, is sublime.

However, engage the paler, contrasty Reference mode and it quietens down to a whisper-like 48 decibels, though the more exacting, brighter yet blackout-friendly Cinema Film mode.

During a stunning 4K sequence shot at sunrise on Fuji-san, the black levels were utterly convincing, containing plenty of shadow detail. Images are super-smooth, too, with the lightning-quick response of the VPL-VW300ES supplying ultra-fluid images from high-octane sequences.

I wasn't convinced by its frame interpolation circuitry, called Motionflow, partly because it's not much needed, and partly because engaging the 'impulse' mode dulls the image somewhat.

It doesn't miss a beat when thrown Guardians of the Galaxy, offering clean, crisp Full HD detail that's terrifically boosted by Reality Creation. War of the Worlds on DVD also gets a shot in the arm from this darned effective upscaling tech.

Even a blast of ProEvolution 2015 from an Xbox 360 in the bright yet unusually conservative 'game' mode does well, though I did notice some jagged edges.