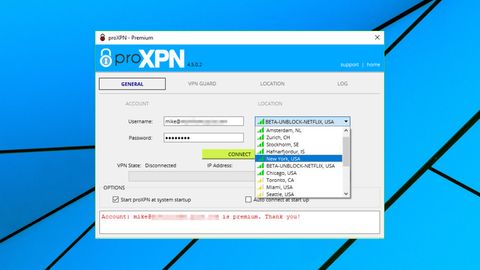 ProXPN's unlimited free plan might be worth a look for experienced users, but its commercial products are underpowered and overpriced.

If you like a VPN website to get straight to the point, clearly highlighting its main features, proXPN will be a big disappointment. It's a cluttered text-heavy mass which has twice as many words as usual, yet somehow tells you almost nothing about the service.

The site has practical problems, too. A 'Visit our Help Center' link is broken, pointing to a forum which no longer exists. And although the front page suggests you 'click here' to view step-by-step instructions for setting up your mobile devices, the link just points you back to the same front page.

The company tried to win us back with a free plan, although it's very basic. You get just one US location (Chicago), there's no mobile support, and it only protects web browsers, so instant messaging, emails and anything else internet-enabled still uses your regular connection.

The website says the free plan is limited to 300Kbps, but our tests showed much better performance, with speeds of up to 10Mbps. We don't know if that's typical - maybe downloads are throttled to 300Kbps at peak times - but as the plan also has no data limits, unusual for a free product, it might be worth a look.

ProXPN's Premium plan drops all the restrictions and gives us access to the company's small, torrent-friendly network of 15 locations across 9 countries: USA, UK, Australia, Hong Kong, Iceland, Netherlands, Singapore, Sweden, Switzerland. (The client also lists servers in France and Japan, but they weren't available during the review.)

The major plus is probably access to proXPN's mobile apps. At least, that's the theory. The company doesn't exactly seem very interested in them, though. As we write, the Android app hasn't been updated since October 2017, while the iOS build hasn't had anything but bug fixes since 2016.

Maybe the value would win us over? Nope. ProXPN's minimum account is 3 months long, costing the equivalent of $9.98 a month, payable via card, PayPal or Bitcoin. Buying a full year subscription cuts the cost to a more average $6.25, but if you're willing to sign up for two or years, there are much better deals around. NordVPN and CyberGhost's cheapest plans are under $3 a month, for instance, while Surfshark's two-year plan is priced at $1.99.

ProXPN's privacy policy is shorter than most at under 200 words, and that's often a problem, as there's just not the space to properly explain what a company is doing.

In this case, proXPN just might get away with it, as the company claims it doesn't log anything, at all. This is the relevant section:

"proXPN, B.V. only collects your sign-up information, email, and password. We do not keep logs of connection times, activity, or origin IPs. What we don’t collect cannot be requested."

While that sounds good, as usual with small VPNs, there's no way for anyone to tell whether the company lives up to its promises. You're left to take these claims on trust.

We have no reason to doubt proXPN, but the dates on the policy are a concern. The Canary Policy states that "as of 2016-09-26 we've not had any gag orders relating to our users or our IP's", for instance, while the document was otherwise dated "July 20th, 2015." If the company has 'forgotten' to update its Canary statement for years, it seems at least possible that other updates might also have been missed.

Most modern VPN clients open with a stripped-back console that makes it as easy as possible to use the service: choose a location, click a Connect button, and you're done. Easy.

ProXPN's Windows client ignores all that, and crams its opening screen with unnecessary extras. There's your username and password, a choice of protocol (OpenVPN, L2TP, PPTP), UDP and TCP options, an Upgrade button, a couple of startup settings, and a text panel with a log of your OpenVPN connection status. These are all useful options, but there's no reason to have them visible all the time, and it would make much more sense to tuck them away on another tab

Tapping the Location tab displays a world map. Normally VPN clients will use these to display your current location, maybe the locations of its servers, but this is just a static world map, with no markers for locations, servers, or anything else. It might be useful if you need a reminder of where Australia is, say, but otherwise it's pointless.

You could try to avoid these graphical extras by right clicking the system tray icon, but even that menu has some overly technical options (the ability to set your OpenVPN port). Worse, some of the most important menu items just don't work (the Disconnect option didn't close our connection, or do anything else that we could see.)

The client's only other feature is VPN Guard, which apparently enables telling the client to close specified apps if the VPN connection drops. Sounds useful, but, well, there's a problem.

The first issue is the client can't forcibly close an app. Instead it just does the equivalent of clicking the close button, or pressing Alt+F4, and that could leave an app open if it displays any prompt before it closes ('Are you sure?', 'Do you want to save?').

The major issue, for us, came next, when we found VPN Guard disabled our internet access and wouldn't restore it. We turned it off, it turned itself back on. We closed the program, our internet remained dead. We uninstalled it, no change. We reinstalled it, tried turning it off again, no luck. There was no support on the website, so we tried raising a ticket, but no help materialized. Eventually, we solved the problem ourselves, but only by some very low-level Windows work.

Kill switches always have some level of risk, but most clients restore your internet access when you turn them off, and the worst we've experienced in the past is the need to reboot before normal access was restored. There's simply no reason or excuse to have even the possibility of failing as badly as this, especially when there's little support.

The proXPN website claims it 'allows you to access your favorite sites no matter where you live or travel to', but how does it really perform?

We started by logging into the UK server, but BBC iPlayer noticed an issue, telling us 'this content is not available in your location.' ProXPN did get us into lesser targets like US YouTube, but failed again when we tried US Netflix.

Our performance tests delivered inconsistent results, with the same servers varying anywhere between 15Mbps and 40Mbps over time. While that's fine for browsing and streaming, it's slower than most of the competition, and well below our non-VPN download speeds.

ProXPN's unlimited (data) free plan might be useful for experienced users, but there's not enough features or functionality to justify handing over any cash, and the lack of recent updates and general feeling of dusty decline makes us think that won't be changing any time soon.