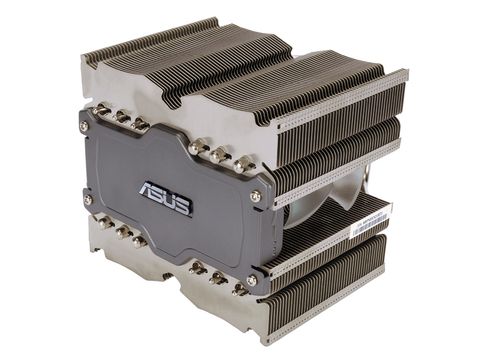 It is nice, shiny and blue but the Triton 88 doesn't offer the value for money that some of its competitors do

If this was priced in line with the rest of the competition then we would happily recommend this chiller but as it is, we think its a little too pricey for the performance it offers

The Triton 88 is Asus' latest cooler, compatible with Intel Core i7 processors. It's a high-end chiller, designed to take the latest chips to their air-cooled, overclocked peaks and it's got a CPU support list about as long as Scan's processor inventory.

To cope with the extra overclocking prowess of both the new Intel and AMD chips, though, Asus has gone for a typically huge design with twin cooling towers and a 120mm fan spinning away under a blue LED in between them.

So, it looks the part then, and performance too is right up there with the best. We tested it against a stock cooler and a low-end aftermarket option, which managed 67 and 58 degrees respectively under load.

The Triton 88 managed to drag that operating temperature down to 54 degrees. Unfortunately, OCZ has already beaten Asus to the i7 punch with its Gladiator cooler, which hits exactly the same temperature, but for less than half the price.

To compound this, the Triton is a bit of a fiddly beast to fit to an Intel board too. The large sets of aluminium fins hang over the corner screws, meaning you'll need to use the packaged spanner to tighten things up. This in turn means that you've got no hope of fitting the cooler without totally removing the mobo from the chassis first.

The Gladiator also requires this – using the same backplate to screw in to – but you don't need as much free space around the cooler to squeeze in the tiny spanner.

So, although the Triton is cool and blue, it's far too pricey when you compare it to OCZ's excellent chiller.

Buy from our affiliates: MicroDirect