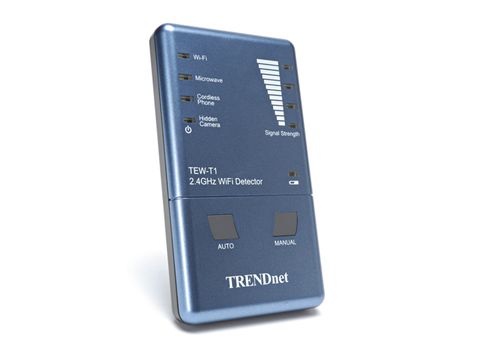 Good idea, but needs some developing

This device comes in the traditional TRENDnet colour that we're more used to. Which is to say, this is the colour we don't like. Regardless of that, this product deserves to be tested with the same diligence we'd allow a £400 graphics card.

This is a device with manifold uses. In essence, it's a wireless detector. That means it can detect, identify and rate various wireless signals in a given area.

It's a small and light device, which points to good portability. Unfortunately it's a little too tall to be comfortably pocket-sized, and doesn't feel particularly sturdy.
Using the device is simple. You can plump for either manual or automatic modes, and the information is passed on to you via the gift of green LEDs. Yup, that's right, it's a blue plastic box with a few LEDs on it. Doesn't exactly scream "value for money", eh?

There's a further problem in that it doesn't support wireless N networks, so it doesn't even work with the latest technology. That seems a bit of a howler from TRENDnet. Although it picked up our cordless phones, we had to get close to the microwave before that was detected.

There's undoubted potential here, but it remains unfulfilled in this incarnation. An LCD display showing network names and security status would be much more useful for finding hotspots, for example. Detecting sources of interference is a good idea, but the feedback of a flashing light fails to impress. At the moment, this is just a device that replaces trial-and-error with LEDs.