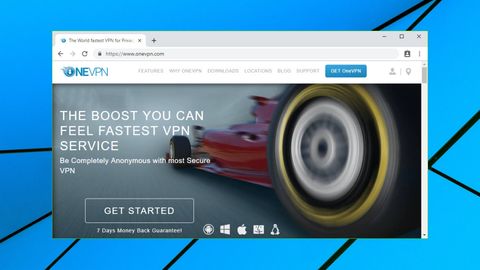 An unprofessional mess of a VPN which makes big claims, and lets you down on all of them. Avoid.

There are Windows, Mac and Android clients, with iOS supported via a third-party app (Cisco AnyConnect), and the service supports simultaneous connections from up to five devices.

OneVPN seems to refer to site-unblocking abilities with a One-Stream feature, which apparently gets you 'the fastest streaming service and finest connectivity [so that you don't] miss out your favorite shows or any of the web content.'

Some of these claims are hard to believe, and the occasionally strange descriptions don't help. OneVPN says it can offer great value because its 'servers are core-upwards customized for optimum performance. The customized servers are designed for speedy and flawless packet switching that enables the OneVPN network to be stable and ultra-fast.'

What does this mean, precisely? We've no idea. It's like the writer is throwing in jargon and marketing-speak at random to try and impress non-technical users, rather than explain key points to everyone else. ('Slow? We're not slow! We use special whizz-bang protocol switching technology to make us fast!')

There are at least more payment options than usual, including credit and debit cards, PayPal, Bitcoin, gift cards and more.

OneVPN also offers a 7-day money-back guarantee, although with several restrictions. You only qualify if you 'are less than completely satisfied with our services or feel that OneVPN does not match your standard needs of a VPN', for instance, and you must state a reason when you ask for a refund. Also, you must not have transferred more than 3GB of data. That should provide cover if you have problems connecting, or performance is poor, but other services might give you more time to claim with no conditions at all.

Many VPN users are understandably concerned about logging, but OneVPN's website doesn't try to hide the issue. The company operates a ‘zero logging policy’, it says, stating: "We do not monitor or keep any logs of our users." That seems clear, but it's also a standard line for most VPN providers, so we headed off to the small print to dig into the detail.

Unfortunately, there's not very much more available, just some reassuring but vague words:

'We do not track any physical addresses and locations, numbers, or any other personal information. We do not store or keep records of your IPs and your payment processes. We do not keep any track of your online activities because that is what we deliver the privacy and protection.'

While this sounds promising, it's incomplete, as we already know OneVPN must be tracking some information. The company says it restricts you to five simultaneous logons, so somewhere, at some time, there's a record of login sessions. We're told you can't get a refund if you've used more than 3GB of traffic, which means there's a persistent record of bandwidth used.

None of that means OneVPN is doing anything dubious, of course, but what it suggests to us is that the company is saying what it thinks customers want to hear ('we don't log anything!') rather than fully describe what's happening ('we do log some information, but this doesn't hurt your privacy, and here's why.')

VPN providers have got away with that kind of vagueness for years, but maybe, just maybe, those days are coming to an end. Big-name providers like TunnelBear, VyprVPN and NordVPN have put themselves through public audits to give users solid evidence that they're doing what they claim, and if you want to compete with that, saying 'we don't log anything, honest, just trust us' is no longer enough.

Signing up with OneVPN seems straightforward. Choose a plan, a payment method, then enter your details, much like any other web service you've ever bought. The website displays a 'thanks' message, and an email arrives seconds later with your login details.

We accessed the Client Area and browsed to the Your Details section. Despite OneVPN's claim that it only collects your name and email address, we found it also knew our country and had assigned us a city. This wasn't completely correct, but it was the location associated with our IP address. At a minimum that means they're also collecting those location details, maybe with the IP address and other information.

Our welcome email pointed us to a Downloads page. OneVPN offers multiple clients for Windows, Android and Mac, so we grabbed the Windows 10 version. On launch, Windows SmartScreen alerted us that it had 'prevented an unrecognized app from starting. Running this app might put your PC at risk.' The installer hadn't done anything wrong - the only issue is that OneVPN hadn’t digitally signed the executable - but this still looks very unprofessional, especially for a company which specializes in security.

We had a succession of problems getting the client to launch and log in. The problem turned out to be that OneVPN hadn't recognized that we'd paid via PayPal, and so didn't consider our account activated. It took three emails to support to get this fixed, and even then, the website continued to send us demands to pay the invoice we had paid already.

The client interface takes the same core approach as most of the competition. There's a big Connect button, a list of locations, and a sidebar which gets you access to other functions and features.

You can filter the location list by task or priority (P2P, VOIP, Streaming, Security), or by protocol (OpenVPN UDP or TCP, PPTP, L2TP, OpenConnect), and there are switches to enable or disable the kill switch and 'auto reconnect.' We're happy to see these options available, although arguably there's no reason to have them on the main screen. You're unlikely to use them regularly, which is why most apps hide them away on a settings page.

Although the sidebar has seven buttons, most of them are useless. One displays your subscription details; another tells you about OneVPN; two others are labelled FAQs and Support, but both try to open your browser at the same URL, which does nothing more than display a 'page not found' error (the real URL is actually here). Again, that's hugely unprofessional.

There is a Settings panel, but that's another disappointment. There's the same Kill Switch and Auto Reconnect options available on the main screen, a simple 'Start at boot time' checkbox and a DNS Leak protection feature. An 'Advanced Settings' link looked intriguing, but all it did was ask us to enter a URL, with no clues as to what this meant.

This wasn't too promising, and the situation only got worse as we began to notice various technical issues.

Every time we clicked the Location list, for instance, an error message told us 'cannot locate resource 'images/flags/sp.png'. That sounds small, but we had to clear this by clicking OK, every time we displayed the location list, and that quickly became irritating.

The kill switch turned out to be dependent on the Windows firewall. Try to turn it on, and a warning message from the client states 'if you use another firewall, kindly disable it first.' You must turn off your preferred firewall if you want the kill switch to work? Really?

The problems continued. Sorting the Location list leaves some countries with the wrong flags; a Ping test didn't return any figures; there were unexpected error messages, and once, the client crashed, its window disappearing, without any form of alert. If that happened in real-world use, could it leave you unprotected, without realizing? Maybe.

Even if we ignore all this, there were a host of smaller usability issues. The client doesn't allow switching servers until you've closed the current connection, for instance. You must click an 'are you sure?' button every time you disconnect, another unnecessary step. The client uses its own dialogs, rather than standard Windows boxes, and they don't work in the same way (some can't be moved, you can't use tab to move around them, they can disappear behind other apps and you may not even realize they're open.)

VPN providers can sometimes have poor clients on individual clients, but OneVPN's failures here go way beyond Windows-specific bugs. Our signup and invoice issues, the poor support, the lack of a digital signature for the client, the broken support links, suggest to us that the company's systems are also at fault, and no-one is making any significant attempt to test or maintain its apps.

OneVPN's service and Windows app had proved a massive disappointment so far, but could the company gain any credit from our performance tests?

Not when it came to website unblocking, unfortunately. We were able to get into US YouTube, but almost every VPN can do that, and it didn't manage to unblock BBC iPlayer or US Netflix.

UK download speeds were reasonable at an average of 40Mbps. That's adequate for most situations, although it's also well behind OneVPN's main competitors.

Performance tailed off elsewhere, unfortunately, so for example some US servers regularly averaged as little as 8Mbps. That's still just barely enough for browsing, even video streaming, but it's not enough to justify OneVPN as a commercial service, and we've seen free products deliver considerably more.

OneVPN sells itself as a powerful and capable VPN with a stack of features, but we found a clueless provider who failed spectacularly at just about every level. Pick a free VPN at random, roll the dice, toss a coin, chances are you'll get a better service than this.