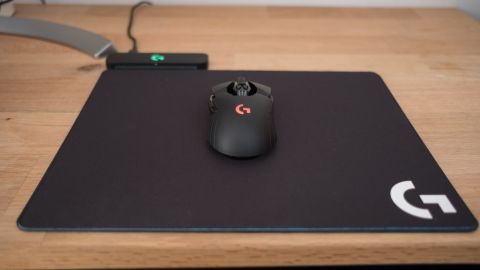 The Logitech G900 has reigned as the undisputed king of wireless gaming mice since it was introduced last year. Now, a successor has already been named with the Logitech G903.

To many, this peripheral might seem like a premature sequel. However, its ability to constantly draw power from Logitech’s new PowerPlay mouse pad could solve one of the last annoyances of wireless gaming mice.

That said, to get this winning combination, you’ll need to spend AED 828 on the Logitech G903 – which is a lot to spend on a gaming mouse by itself – and another AED 608 for the PowerPlay. Altogether, this is an expensive setup, though you can always find deals that are a good AED 200 cheaper.

Despite flaunting a price high enough to make your eyes water, the performance of Logitech’s flagship wireless gaming mouse, and the convenience the wireless charging pad, are worth every cent in our book.

Physically speaking, the Logitech G903 only varies in subtle ways from its predecessor. The gunmetal gray parts of the Logitech G900 have been replaced with a purely black color scheme. While this gives the mouse a more uniform look, we wished Logitech didn’t remove the soft touch coating on the front edge of the peripheral, as it gave us an extra bit of texture for our ring finger to rest against.

The bigger shakeup is on the underside of Logitech G903, which now features a puck-shaped cavity. In this space, you can either add a 10 gram weight or attach a ‘PowerCore’ module that we’ll get into more later.

Otherwise, the Logitech G903’s body shape hasn’t changed – not that we’re complaining. Our hands fall comfortably onto the G903’s gentle curves and its long body make it compatible for a wide range hand sizes. Although there aren’t any surfaces lined with soft touch material or rubber, the mouse never really slipped out of our hands.

The Logitech G903’s newest trick is it comes with the ability to wirelessly charge through a specialized mouse pad called the Logitech PowerPlay. The pad essentially creates an electromagnetic resonance charging field – say that five times fast – that the mouse absorbs through a PowerCore module you can attach to the bottom of the mouse.

With this arrangement, the Logitech G903 can pull a constant current of electricity to both power its operation and recharge its internal batteries. Not only that, the PowerPlay mat comes equipped with a wireless receiver that connects with your mouse, so you won’t need to occupy another USB port for a separate dongle – which you can instead plug into a laptop.

In this way, the PowerPlay sets up the perfect way of using a single mouse both at home and on the go. On a typical day, we use the mouse and specialized charging mat in the office for work and testing, take it out for a few meetings, bring it back home for gaming on our personal rig and come back to the office on the next day to fill the batteries back up with regular usage.

Other than your mouse, it would have been great if the PowerPlay could have charged your other devices based on the Qi wireless charging standard- such as the iPhone X or the Samsung Galaxy S9. But it doesn't do that.

One more drawback is that, as convenient as the PowerPlay is, it isn’t going to get the Logitech G903 fully charged in a jiffy. Going from 0% battery to a full charge with your mouse on the PowerPlay would take between 12 and 14 hours, by Logitech’s estimate.

If you’re looking for a quick charge, plugging in a microUSB cable would be way faster. Thankfully, though, the Logitech G903 has a fairly-sizable battery life with up to 24 hours of usage – or up to 32 hours without any lighting at all.

For these reasons, we would say the Logitech’s specialized mouse mat is a convenient luxury, but not a necessary add-on for the Logitech G903.

The Logitech G903 might be a wireless gaming mouse, but it feels as seamless as a wired one. That’s no small feat, and that’s all thanks to the same Lightspeed Wireless technology that was also in the G900. We never experienced any latency or loss if signal despite using the peripheral in an office saturated with Wi-Fi, Bluetooth and every other type of wireless signal.

Of course, a big part of the Logitech G903’s accuracy comes from its PMW3366 optical sensor with a maximum sensitivity of 12,000 dots per inch. Comparatively, the AED 600 Razer Lancehead is equipped with its self-made 5G laser sensor at an even higher sensitivity of 16,000 DPI.

Some will argue that optical sensors are better than five-year-old laser technology, meanwhile, on paper Razer has a leg up on the sensitivity department. Ultimately, though, after using both mice for a week at the same time, we can confidently say they’re both equally as accurate and reliable.

The real distinction between these two peripherals comes down to aesthetics and ergonomics, which we feel is again a dead heat between the two.

The Logitech G903 is dang expensive and even more so if you’re looking to pick up the PowerPlay mat. That said, if you want the best wireless gaming mouse combo right now, this is it.

Logitech’s Lightspeed Wireless technology was ahead of the curve last year, and it still feels like it’s on the cutting edge today. Now with the ability to always wirelessly charge your peripheral, there’s almost no reason not to ditch the cord.