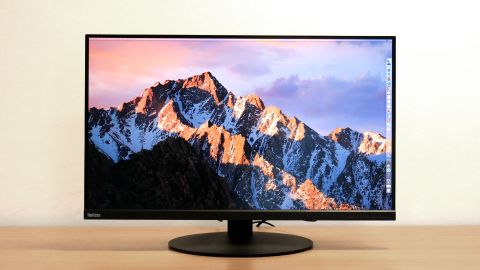 Crazy-high refresh rates, HDR visual sizzle, insanely wide aspect ratios, it’s all happening in the PC monitor market. But if you want some old-school polish and professional precision, plus a few cutting-edge productivity features thrown in, Lenovo’s new Thinkvision P32U-10 desktop panel is quite a proposition.

At 32 inches and offering a full 4K (UHD) native resolution, it slots into what has recently become the go-to form factor for high-end productivity and professional displays. With that in mind, the P32U majors on features like wide color gamut coverage and extensive color space presets, but doesn’t have support for 144Hz refresh, adaptive sync or HDR.

But it does bring relevant extras including a Thunderbolt 3 interface and support for daisy chaining multiple screens, not to mention a fully configurable stand.

Undoubtedly there are far cheaper 4K 32-inch options out there. Over the last 12 months prices have dropped below $400 and £400 for such monitors. But if you want professional-grade precision, you’re going to have to pay for it. In that context, the P32U’s typical retail price of around $1,300 (or £900 in the UK and $1,600 in Australia) is punchy but not completely over the top.

More relevant opposition takes the form of the likes of the Asus PA329Q. That can be had a few hundred dollars cheaper in the USA, but tends to be more expensive than this Lenovo screen in the UK. Such are the vagaries of the international monitor market. The BenQ PD3200U is another alternative that can be had for several hundred less, but doesn’t have quite as extensive a feature set nor quite the same promise of image precision.

Lenovo’s design aesthetic across much of its product portfolio is consistent to a fault. So, there are no surprises with the Thinkvision P32U-10. It looks and feels just like the brand’s better known Thinkpad laptops. That means a relatively somber all-black suit, albeit with a thin-bezel flourish. But it also means a sense of bomb-proof impregnability. This monitor feels nothing if not sturdy.

It’s also supremely configurable. That includes everything from the stand, which includes the ability to rotate the LCD panel into portrait mode, to the wide range of color gamut presets, support for full calibration and a Thunderbolt 3 port.

The latter allows you to do a number of useful things, for instance using a single cable to connect to a laptop and both charge the device and drive the screen. It also enables monitor daisy chaining, and thus a single cable connected to your PC can drive multiple displays. A quad-port USB-A hub plus dual HDMI 2.0 and a DisplayPort 1.2 socket, meanwhile, give you further connectivity options.

Headline specs from the 32-inch IPS panel include the aforementioned 4K native resolution and so 3,840 by 2,160 pixels,1,000:1 static contrast capability, 6ms GtG response and 178 degree viewing angles in both the horizontal and vertical axis. The refresh rate is pegged at 60Hz.

The items that content creation professionals will be most interested in, however, are the P32U’s support for true 10-bit-per-channel color and fully 99.5% of the Adobe RGB colour space.

For the record, the P32U comes pre-calibrated with a full print out of the results, including Delta Es below 2.0 across the board for both the Adobe RGB sRGB gamuts.

No question, the P32U is one of those monitors that looks fantastic right out of the box. Admittedly, the color temperature of the IPS panel generally tends slightly towards warmth, but the immediate impression is of a monitor with gorgeous, rich colors and a consistent image across the panel.

Granted this is not an HDR monitor with the capability to permanently burn an impression of the image it is rendering into the back of your eye. Likewise, gamers won’t be impressed by its 60Hz refresh rate.

In all honesty, nobody who has experienced 120Hz-plus wants to go back to 60Hz. It’s not critical for content creation, but high refresh rates does make for a more responsive subjective computing experience, even just on the desktop, and it’s the one feature that you might miss on the P32U.

That said, exceptional attributes include the excellent viewing angles, natural flesh tones and impeccably smooth gradients. To the naked eye, picking fault with this panel isn’t easy. There’s detail and precision wherever you look.

It’s also worth noting that the 4K native resolution and thus 3,840 by 2,160 pixel grid makes for a very good match with the 32-inch LCD panel. For starters, you get a tighter pixel pitch than with, say, a 40-inch 4K monitor.

Granted, it won’t worry a modern smartphone for pixel density, but it’s sharp by desktop standards. On the other hand, smaller 4K monitors can present scaling issues, while the P32U will be comfortable for most users in terms of fonts and other screen elements with the Windows scaling setting at 100%.

It’s not cheap, the Lenovo Thinkvision P32U-10, not even nearly. But it is an impressive professional-grade display. Those who mainly seek 4K thrills and aren’t worried about achieving the very last word in image precision will find value elsewhere. The same goes for gamers. You don’t get HDR or high refresh rates here, despite the steep sticker price.

But if it’s color and general image quality, plus plenty of pixels and desktop real estate along with extensive configurability both in terms of image quality and installation that you’re after, the P32U surely deserves to be on your shortlist. That it’s a beautifully built and robust monitor just sweetens the deal.